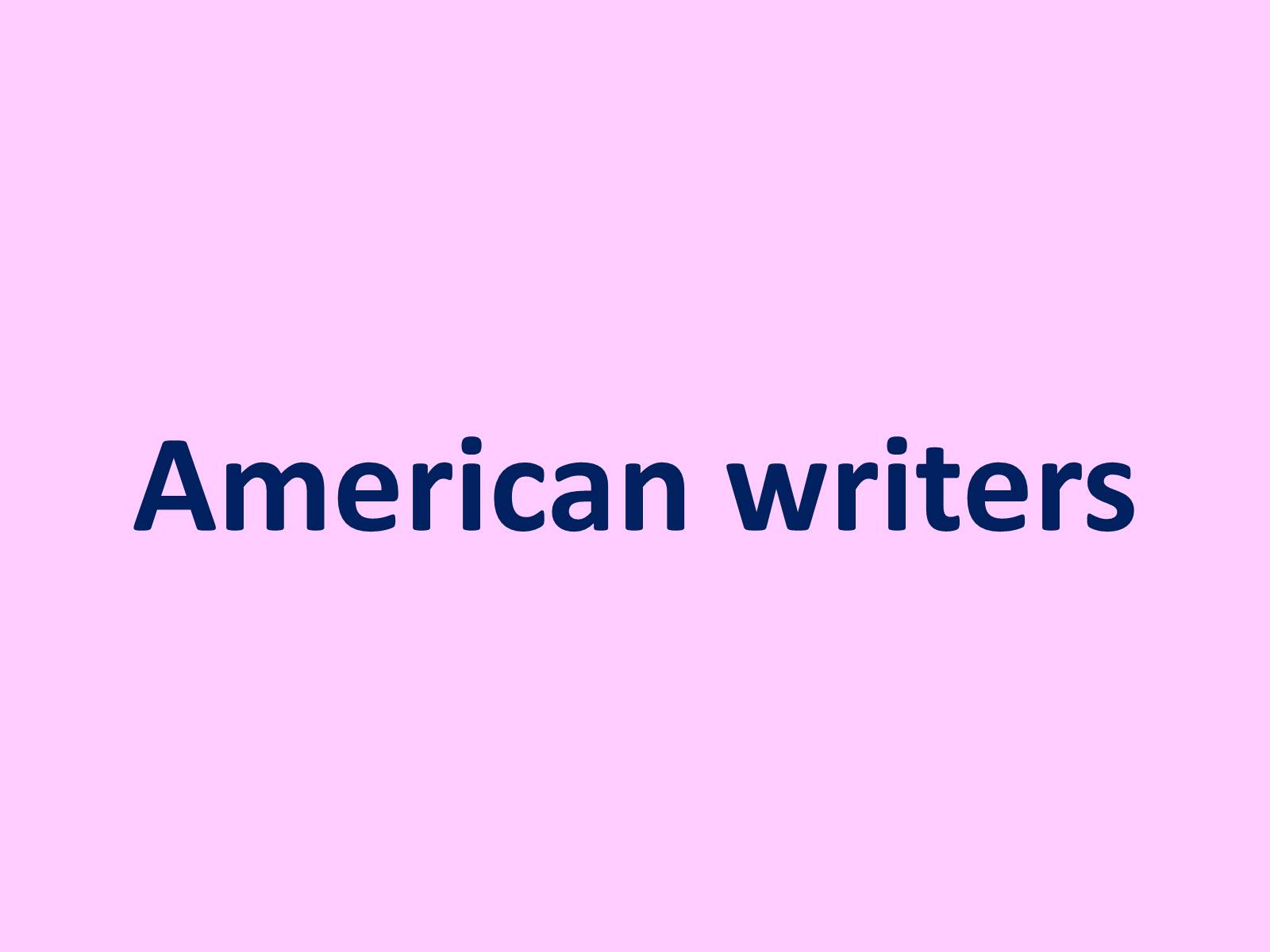 Teodor Drayzer
(1871 – 1945)
He was an American writer and a politician.
His father was a poor seller, immigrated
from Germany. Teodor tried a lot of
professions, studied at the university.
Drayzer began his literature activity in
1892 as a reporter. His first novel was “Sister Carry” (1900).
It was about a girl from poor family who wanted to be an actress.
Then Drayzer wrote a lot of novels about unfair American life.
His best book is “American Tragedy”. 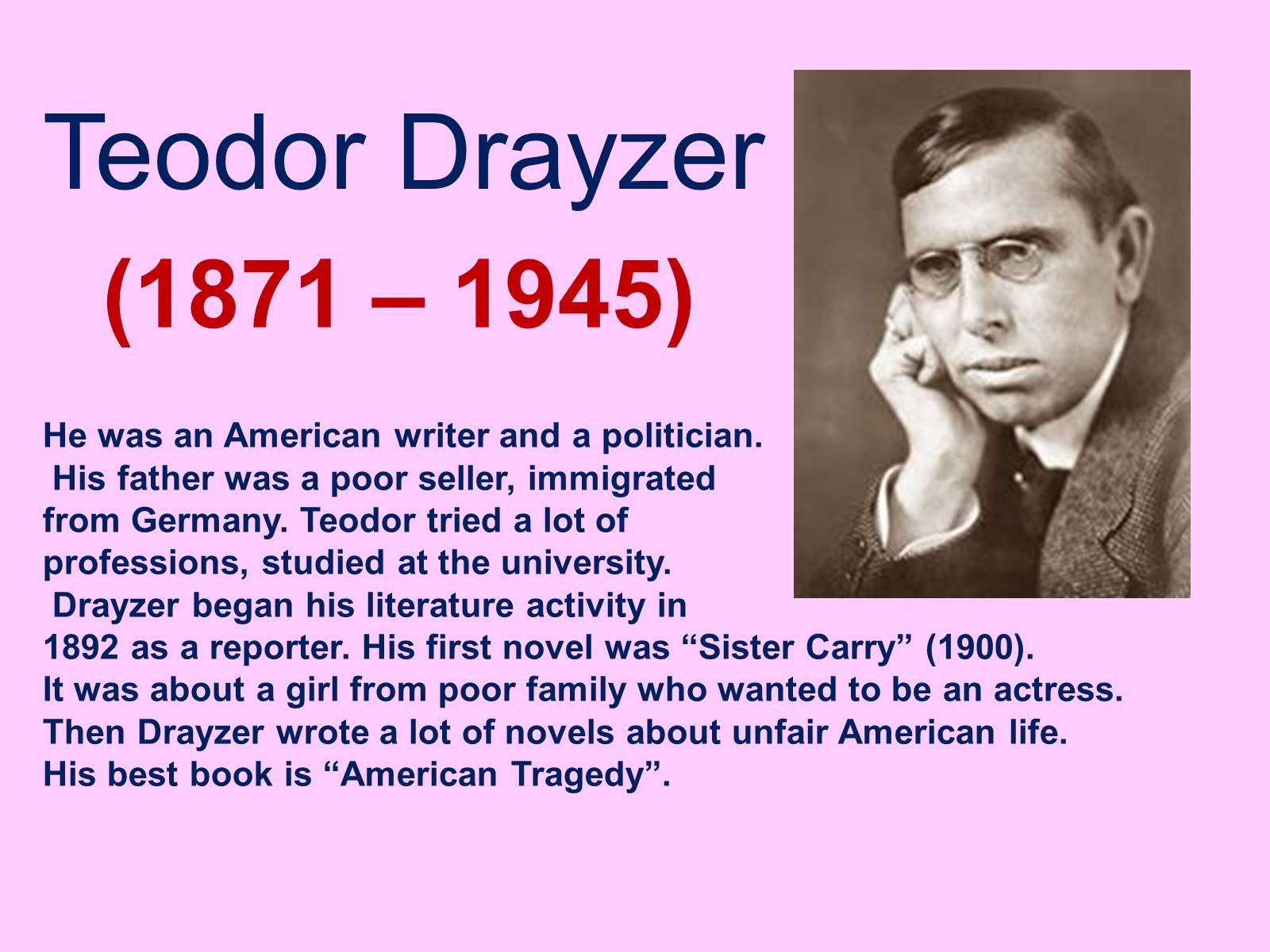 Harriet Beecher-Stowe
(1811–1896)
She was a daughter of priest and
a wife of a professor.
He husband supported her literature studies.
Harriet was a mother of 7 children.
Her book “Uncle Tom's cabin”
was published in 1852 and gave her a great glory.
This book protested against the slavery of Negroes.
The American president Lincoln said about Harriet:
“This little lady caused a great war!” 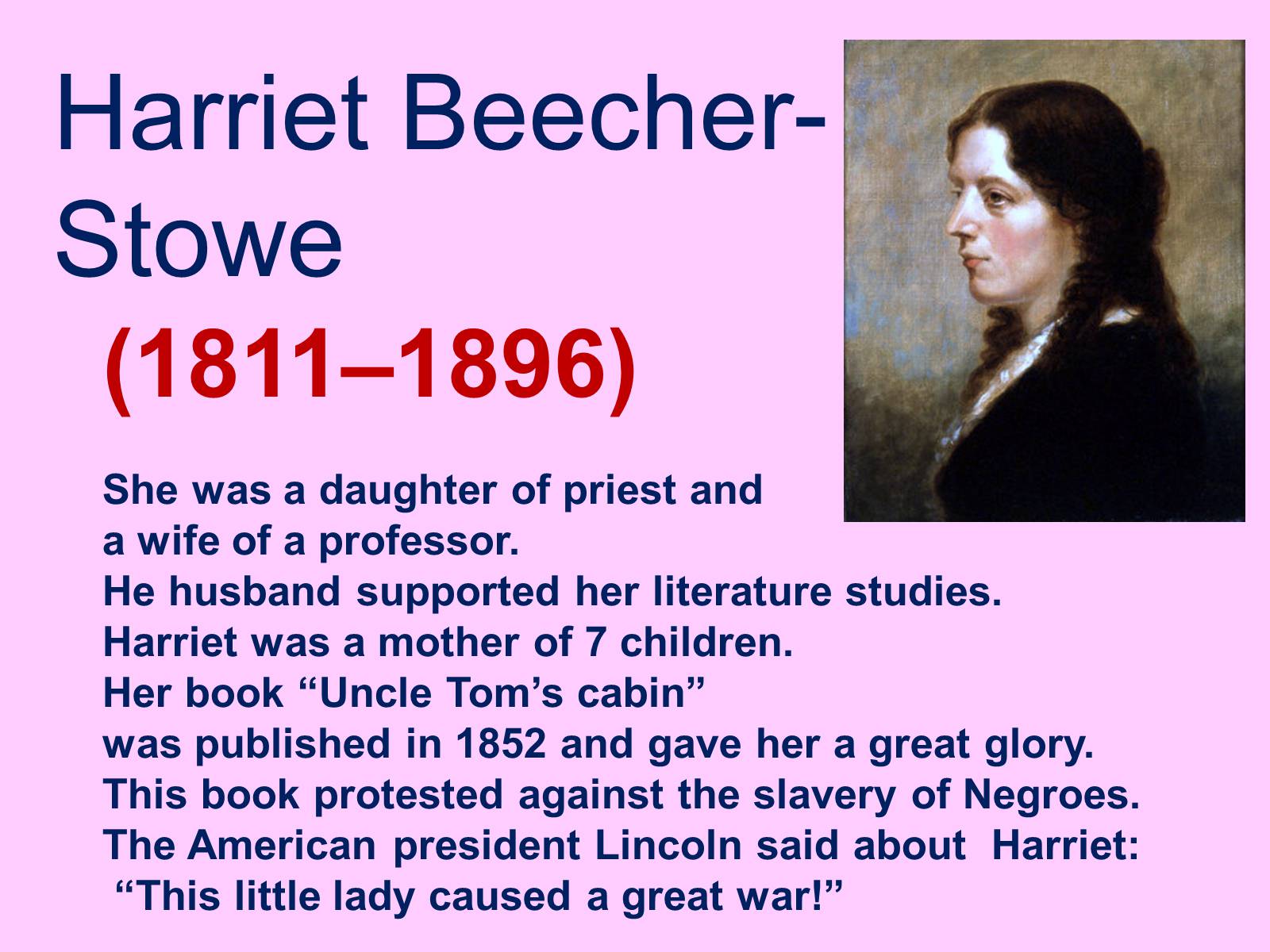 Mark Twain
(1835 - 1916)
His real name is Samuel lemens.
He was born in a small American town.
The parents were very poor and
the boy began to work very early.
He was a printer, a sailor, worked on silver mines.
In 1862 he wrote some humorous stories for newspaper
and was invited to work in it. Since Mark Twain
became a writer. His the most famous books are:
“The adventures of Tom Sawyer”,
“The adventures of Huckleberry Finn”,
“The Prince and the pauper” 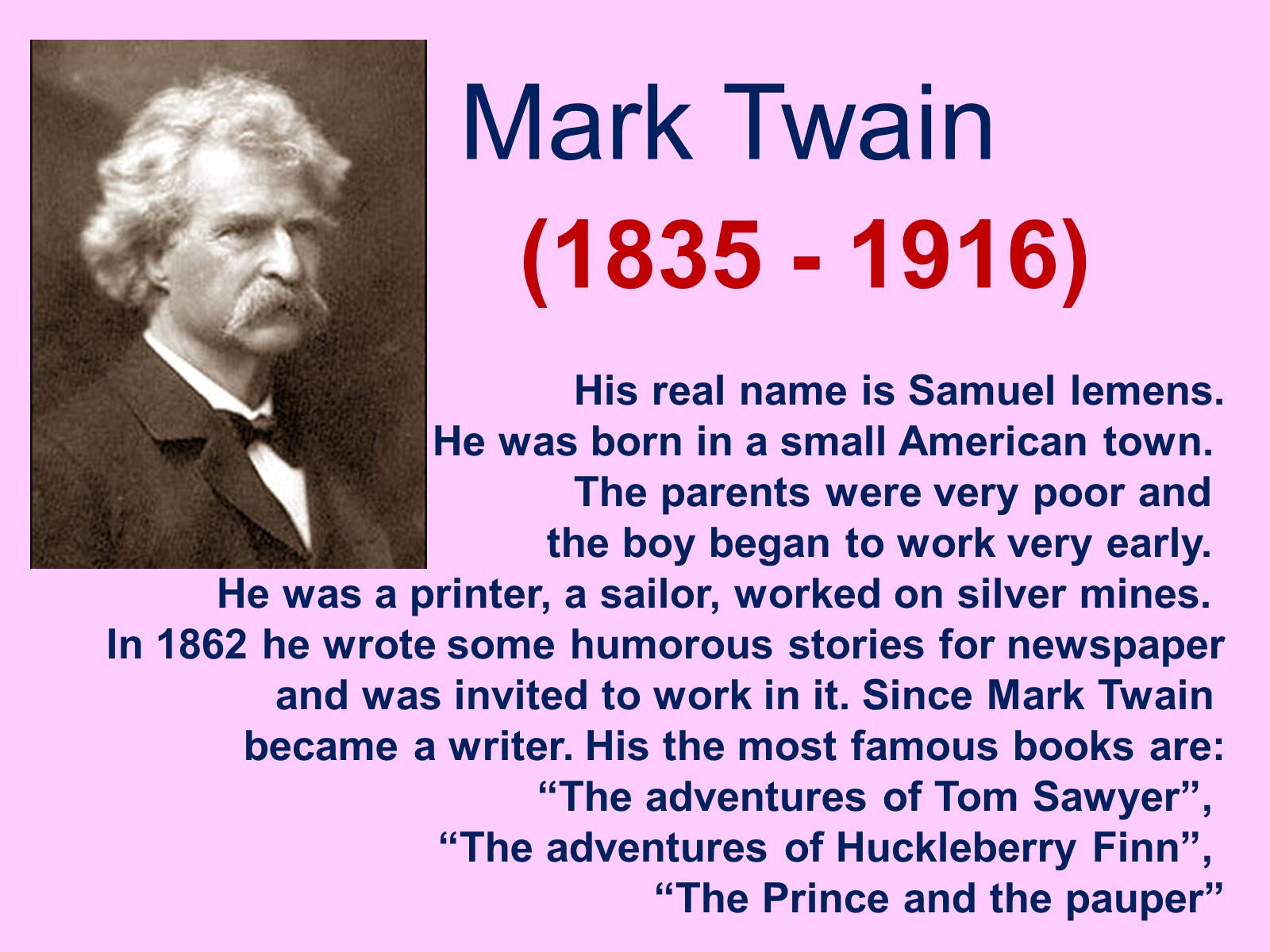 Margaret Mitchell
(1900 -1949)
She was a famous American writer,
the author of the bestseller
”Gone with the wind”. This book, published
in 1936, won the Pulitzer Prize. It was edited 70 times and translated into 37 languages.
The film ”Gone with the wind”, created in 1939 got 10 “Oscares”. The book told about the Civil War in the USA and a great love story. 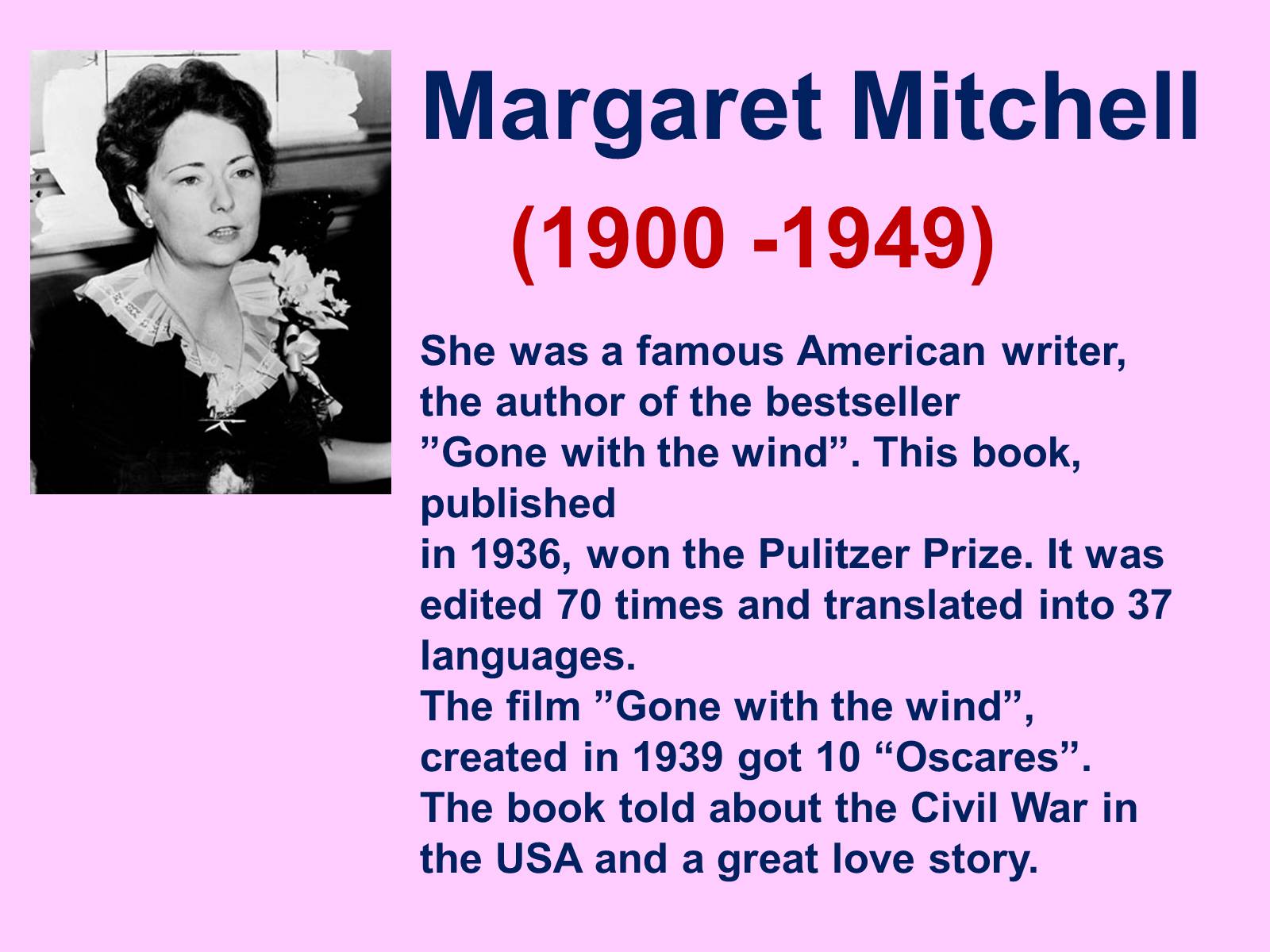 Jack London
(1876 -1916)
His mother was a teacher of music and his father was an astrologist. Childhood of the boy was very difficult. He finished only elementary school and began to work at the factory at 14. Then he was a pirate and a sailor. He travelled a lot and his first stories were about sea adventures. The life of Jack London was full of adventures: a prison, a war, a university… It made him the great author of adventure stories and novels. 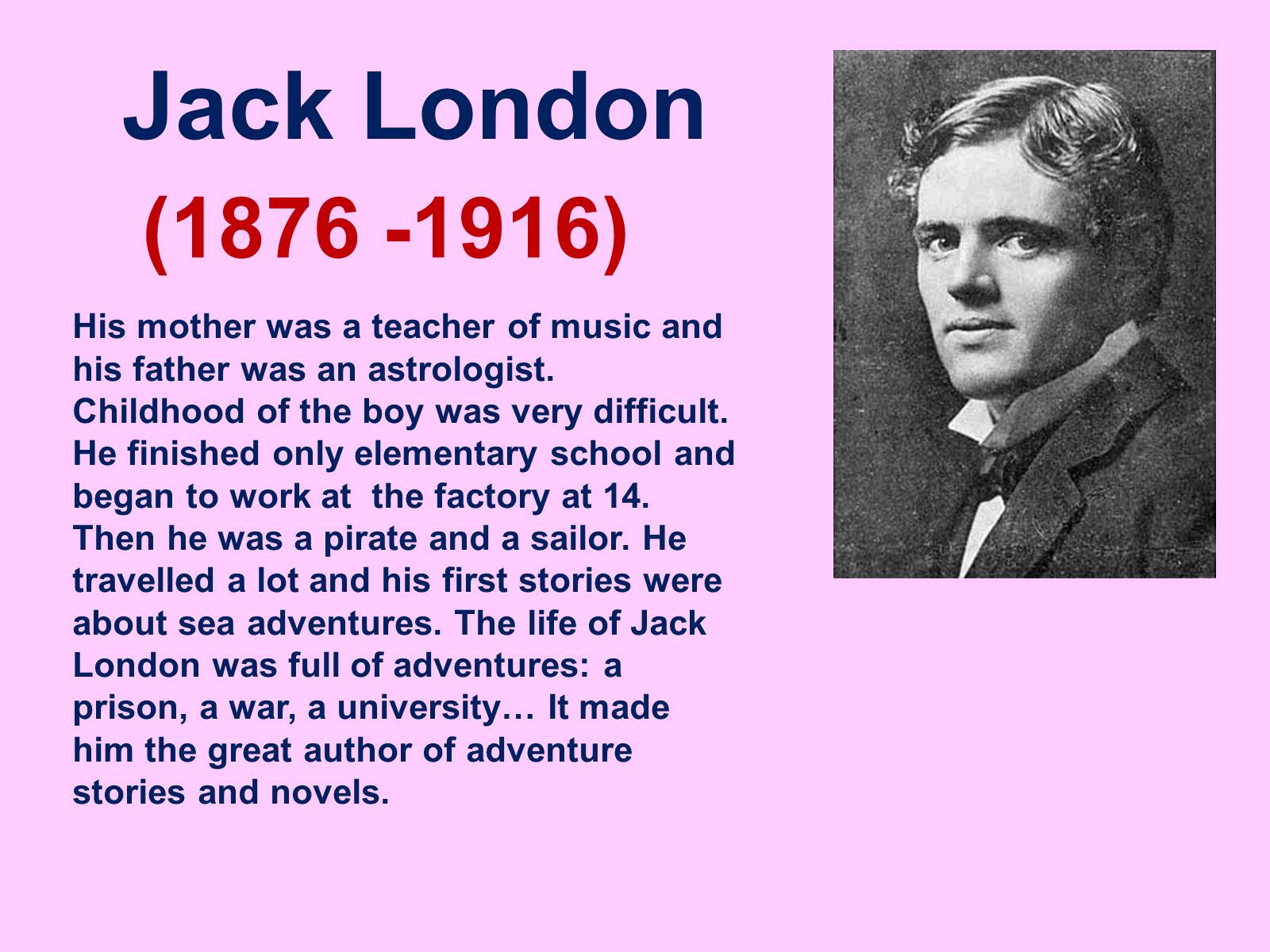 Ernest Hemingway
(1899 -1961)
He got his popularity with his interesting novels and stories
and with his life full of adventures. Hemingway was a writer
from his childhood when he wrote articles for school newspaper.
In young age Hemingway travelled a lot, then he work
as a journalist and fighting in the war with fascists.
Hemingway was the laureate of Nobel Prize.
His the most famous books are “The old man and the sea”,
“A Farewell to Arms”, “For Whom the Bell Tolls” 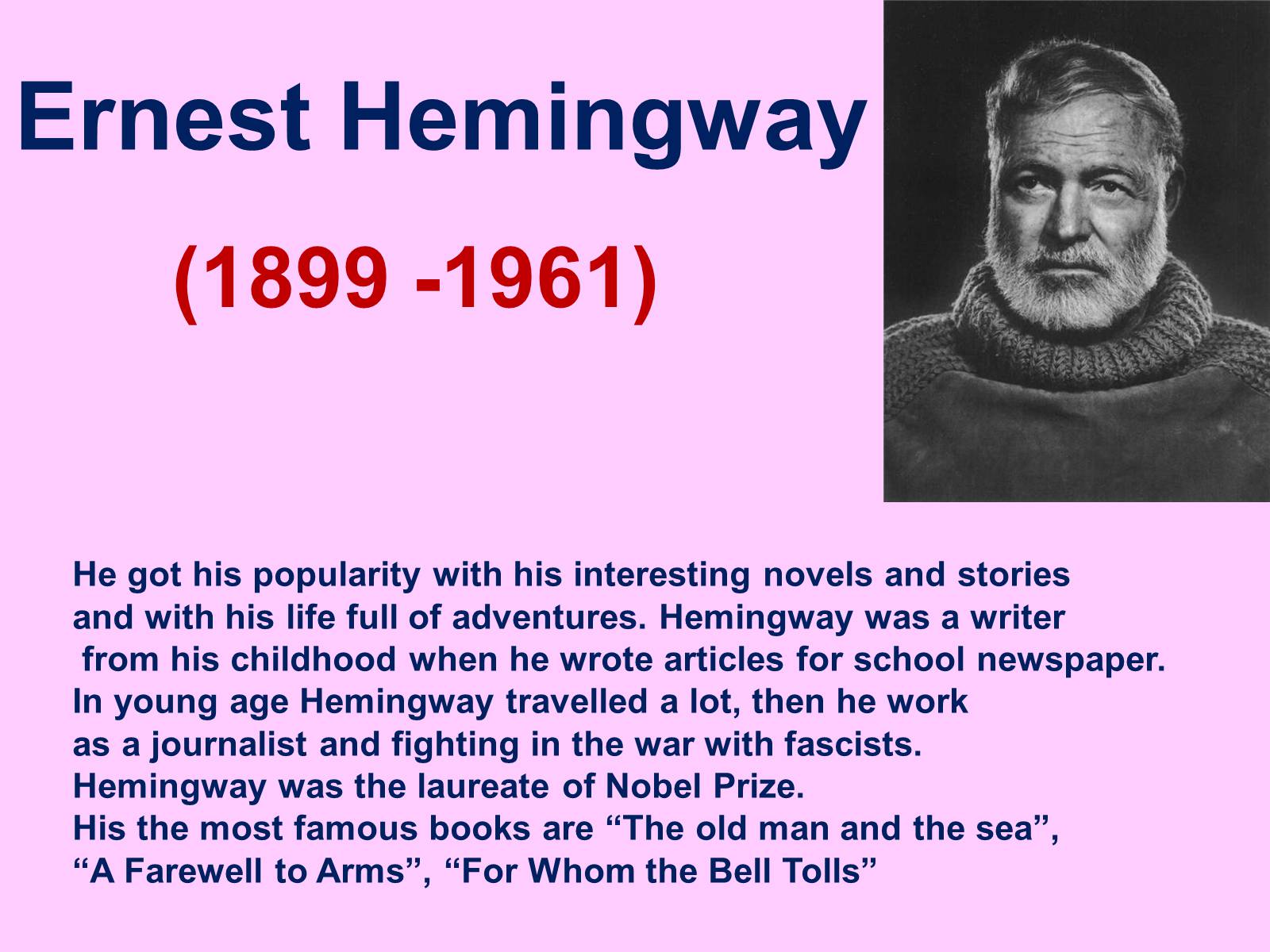