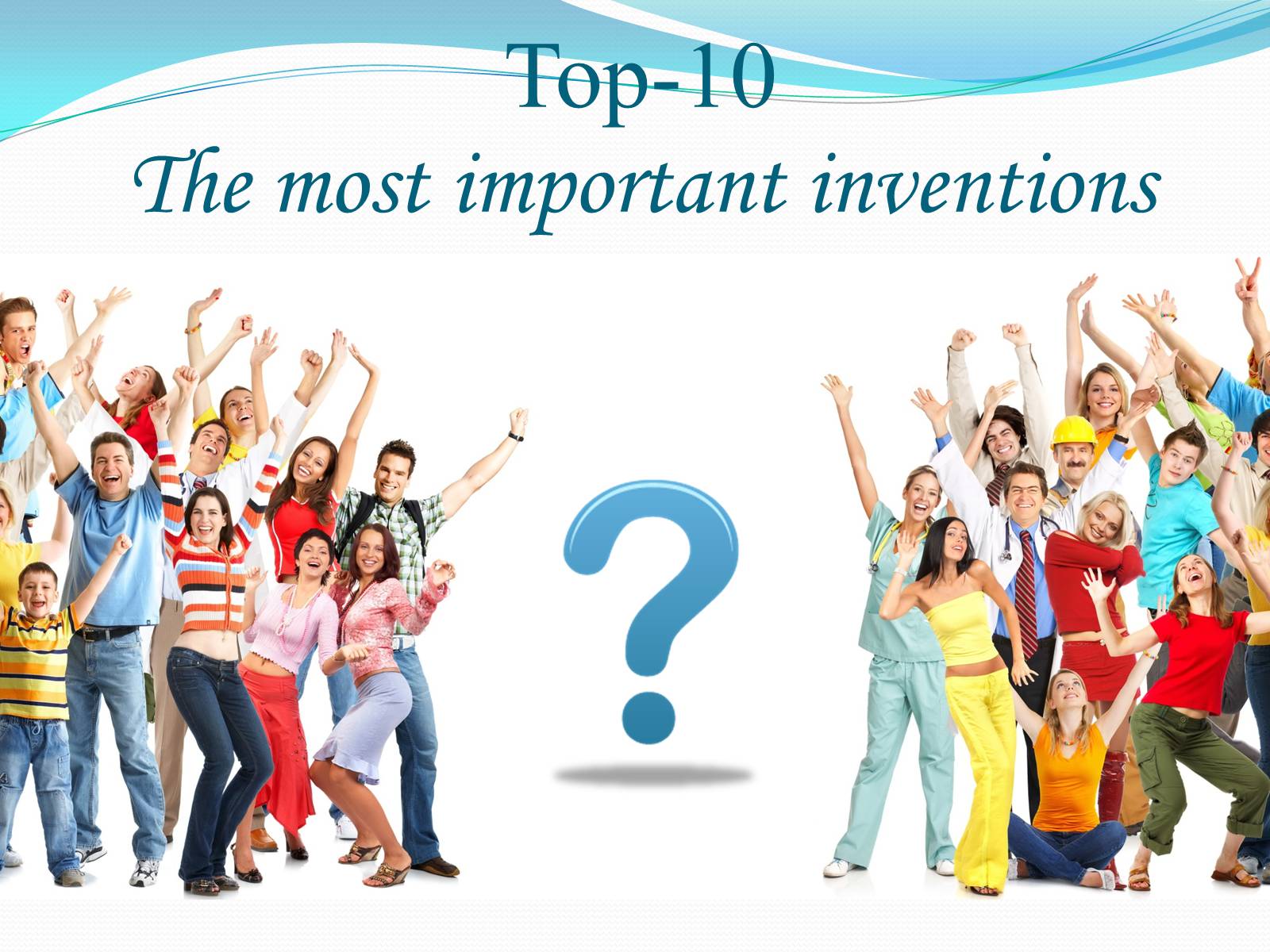 №1 - Fire
People soon discovered the useful properties of fire - its ability to illuminate and warm, to improve on plant and animal foods.
"Wild Fire", which flared up during the forest fires or volcanic eruptions, was terrible, but bringing the fire in the cave man "tamed" him. Since that time the fire was a constant companion of man and the foundation of its economy. In ancient times it was an indispensable source of heat, light, and a means for cooking, hunting weapon.
However, further gains of culture (ceramics, metallurgy, steel production, steam engines, etc.) must use an integrated fire.
Many thousands of people enjoyed the "home fire" kept him from year to year in their caves before they learned how to produce it themselves by friction. Probably, this discovery was an accident, after our ancestors learned how to drill wood. During this operation, the wood is heated, and under favorable conditions, the ignition could occur. Drawing attention to it, people have become widely used for making fire by friction.
And only then, with the development of mankind are available to other ways to get open fire. 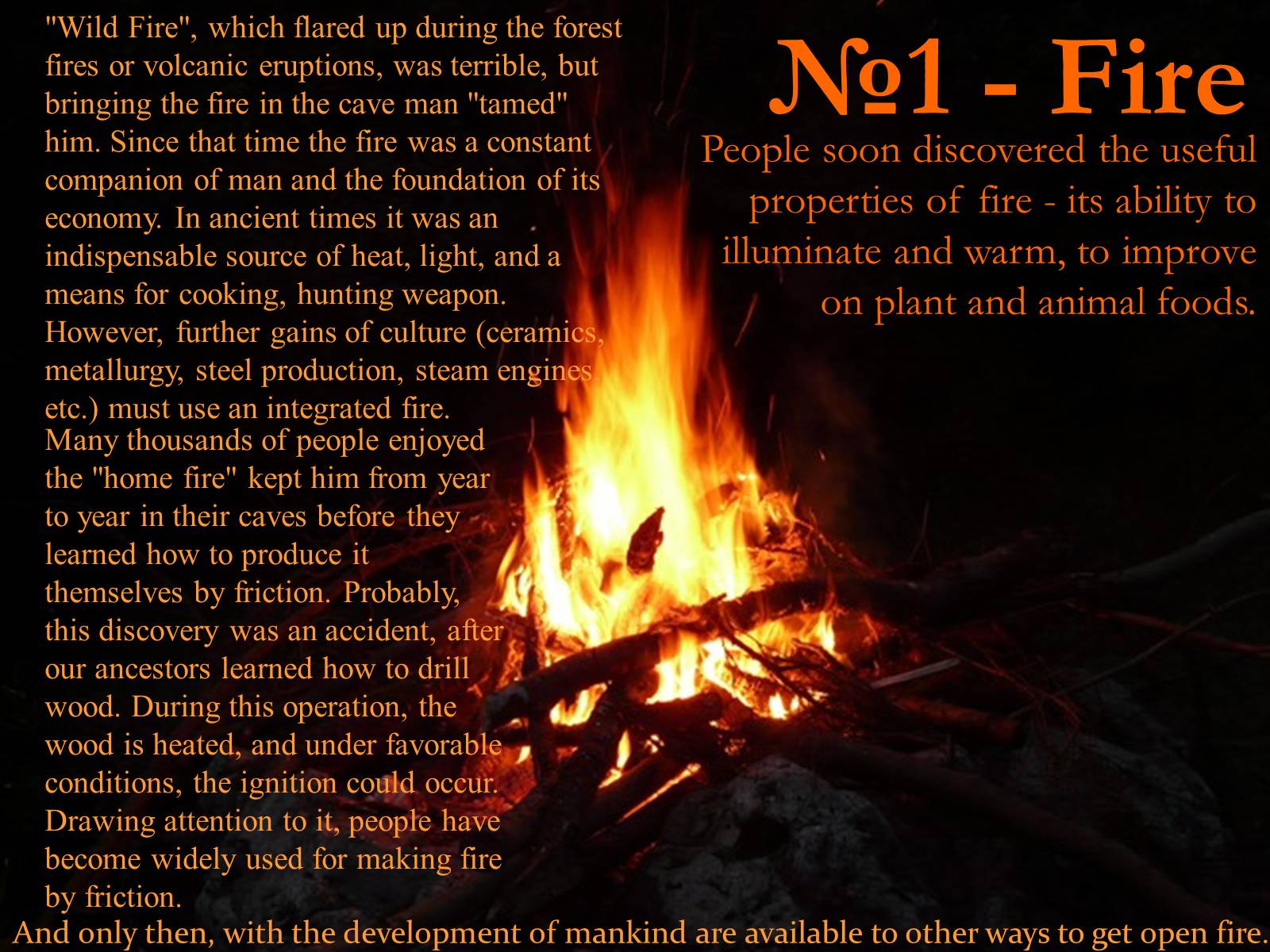 №2 - Wheel and Wagon
Perhaps, it is difficult to find another invention, which would give a powerful impetus to the development of technology.
The prototype was a log-roller, which was at the center thinner than the edges, it was moved under the weight evenly and it does not swing to the side. Later from whole logs were only two rollers at the ends, and between them appeared axis. Then, it was begun to produce separately, and then rigidly fastened together.
It was discovered the wheel and the first wagon.
In later centuries, many generations of masters have worked on the improvement of this invention.
For less friction of the axis wheel greased or steel lubricated with tar. For the sake of reducing the weight of the wheels sawed notches in it, and to strengthen the transverse stiffness of scrapie. After the discovery of metal to produce steel wheel with metal rim and spokes. This could turn the wheel ten times faster and does not afraid of hitting the rocks. Harnessed to a cart-footed horses, a man greatly increased the speed of its movement. 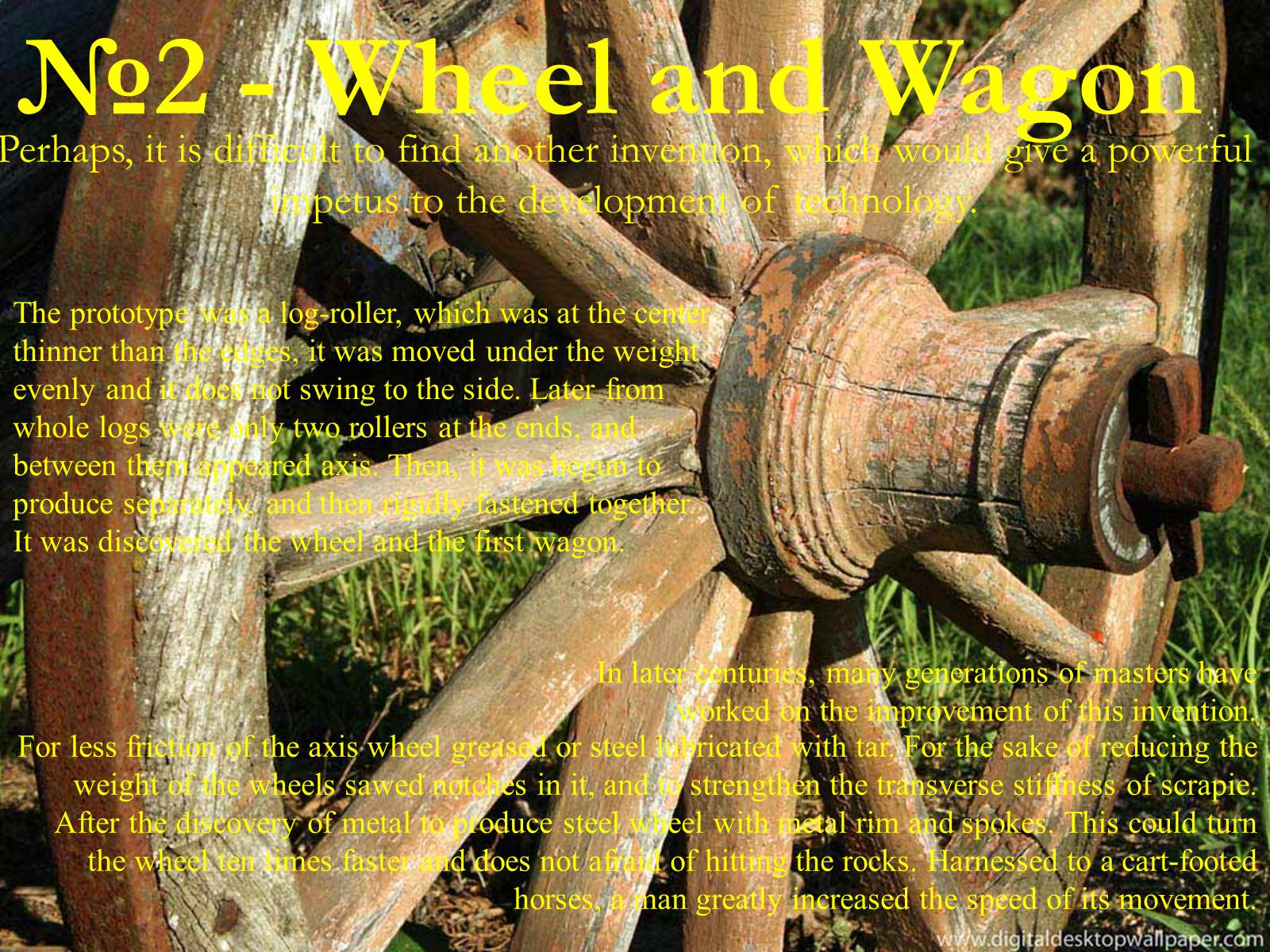 №3 - Writing
The first form of writing in the form of a specially inscribed signs appeared about four thousand years BC However, the writing appeared only after the people invented special graphic characters. The most ancient kind of writing is pictographic.
It is assumed that pictography was widespread among the various
peoples in the final stages of the Stone Age. But at an early stage
in the history of writing the number of icons began to enter
the special conditional icons that represent certain concepts
(such as a sign of the crossed hands symbolized the exchange).
These icons are called ideograms. Everyone who
wanted to learn how to write, had to memorize
thousands of icons. Only at the end of
two thousand BC ancient Phoenicians
invented the alphabet letters and
sounds, which consisted of 22
consonants, each of which
indicates a single sound.
How to say
four-fifths of
all the currently known
from the Phoenician
alphabet emerged.
From the variety of
the Phoenician letters evolved other types of writing. The Greeks have made to the Phoenician alphabet the last major improvement - they are denoted by the letters not only the consonants, but vowels. 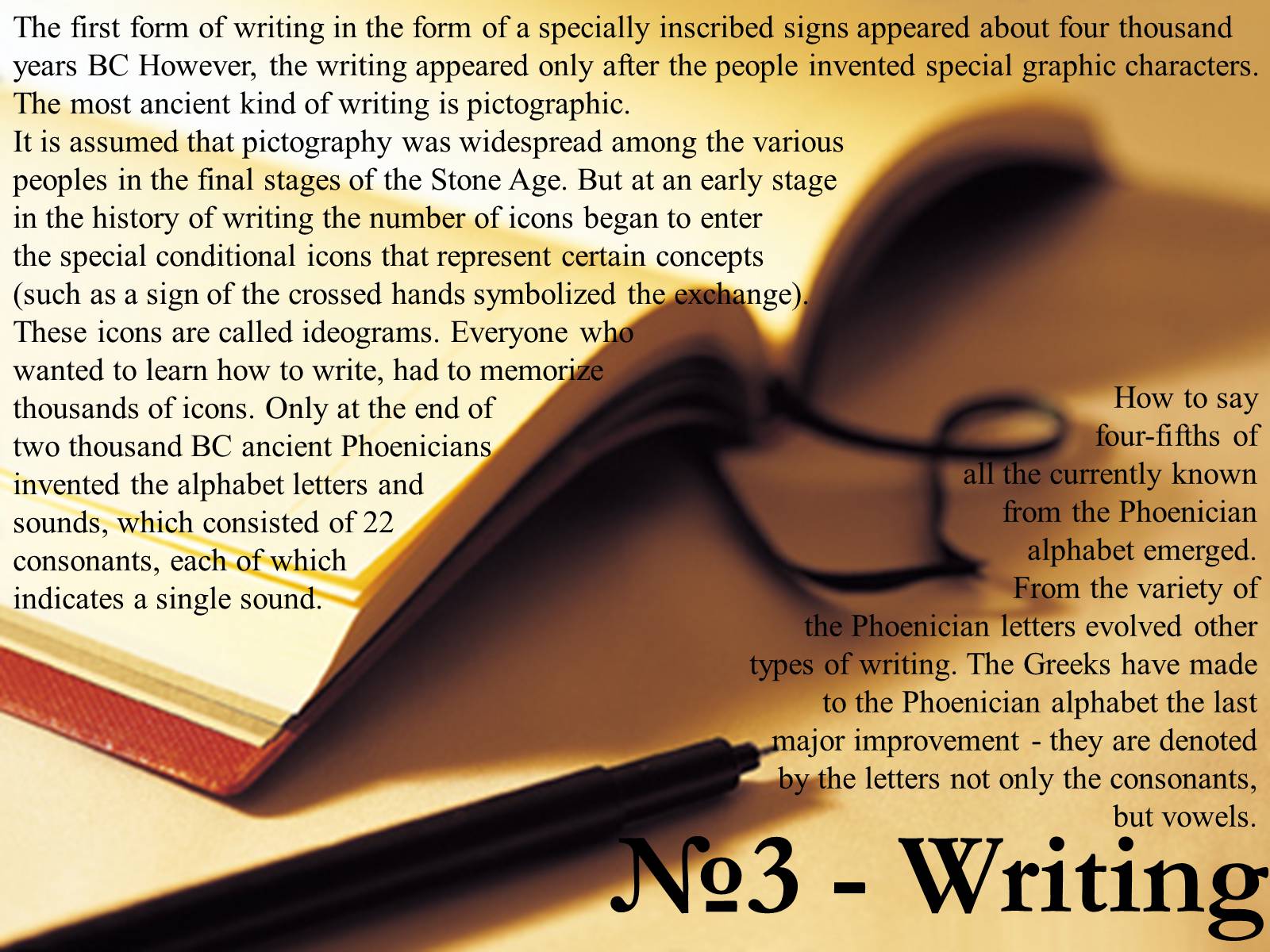 Creators were Chinese. Before the invention of paper in China or written on bamboo tablets, or silk. But silk was always very expensive, and bamboo - a very cumbersome and heavy. In 105, Cai Lun had prepared a new type of paper from old fishing nets. Recent experiments have shown that paper can be made from cheap vegetable raw materials: bark, reeds and bamboo. The latter was especially important, because bamboo grows in China in large numbers. From the captured Chinese artisans Arabs themselves have learned to make paper, and for five centuries
is very profitable to sell it in Europe. The first
is an art borrowed from the Arabs, the Spaniards. In 1154 - Italy, in the 1228th
in Germany, in 1309th in England.
№4 - Paper
- Our era can be called the
"paper era" –(A.Sima,
French bibliographer) 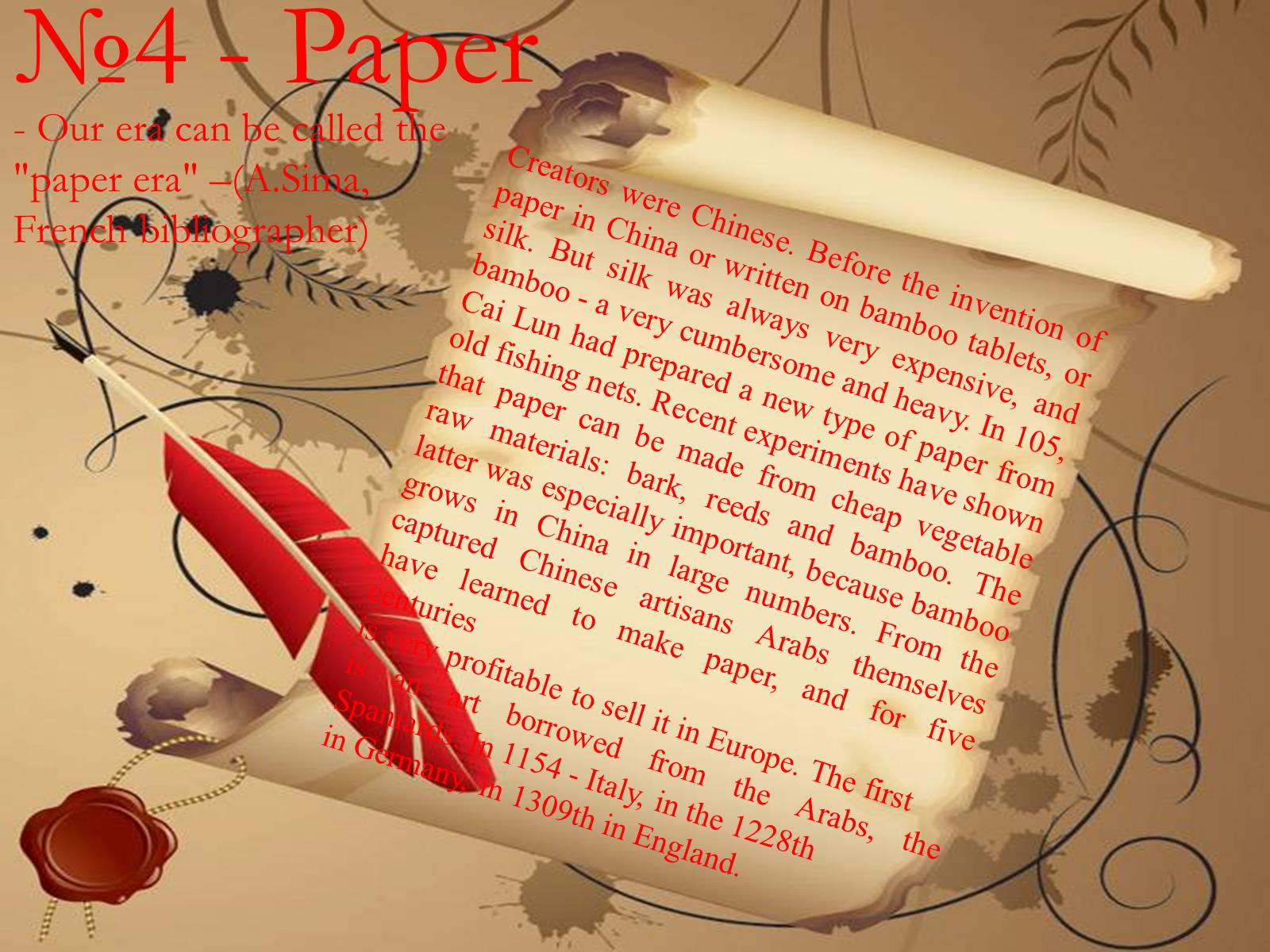 №5 –
Gunpowder
and Firearms
Sun Ssu-miao prepared one of the first samples of gunpowder from sulfur and saltpeter, but without a strong explosive effect. In the future composition of the powder was set in three components: carbon, sulfur and potassium
nitrate. Only in XII-XIII centuries, the Chinese began to use
a gun that resembled firearms, but they invented firecrackers
and rocket. In the first third of the XIII century the
Arabs have achieved great skill in pyrotechnics,
fireworks staging of great beauty.
The monk Berthold Schwartz
thought of using force
propellant gases for
throwing stones - he
made one of the first
European guns. 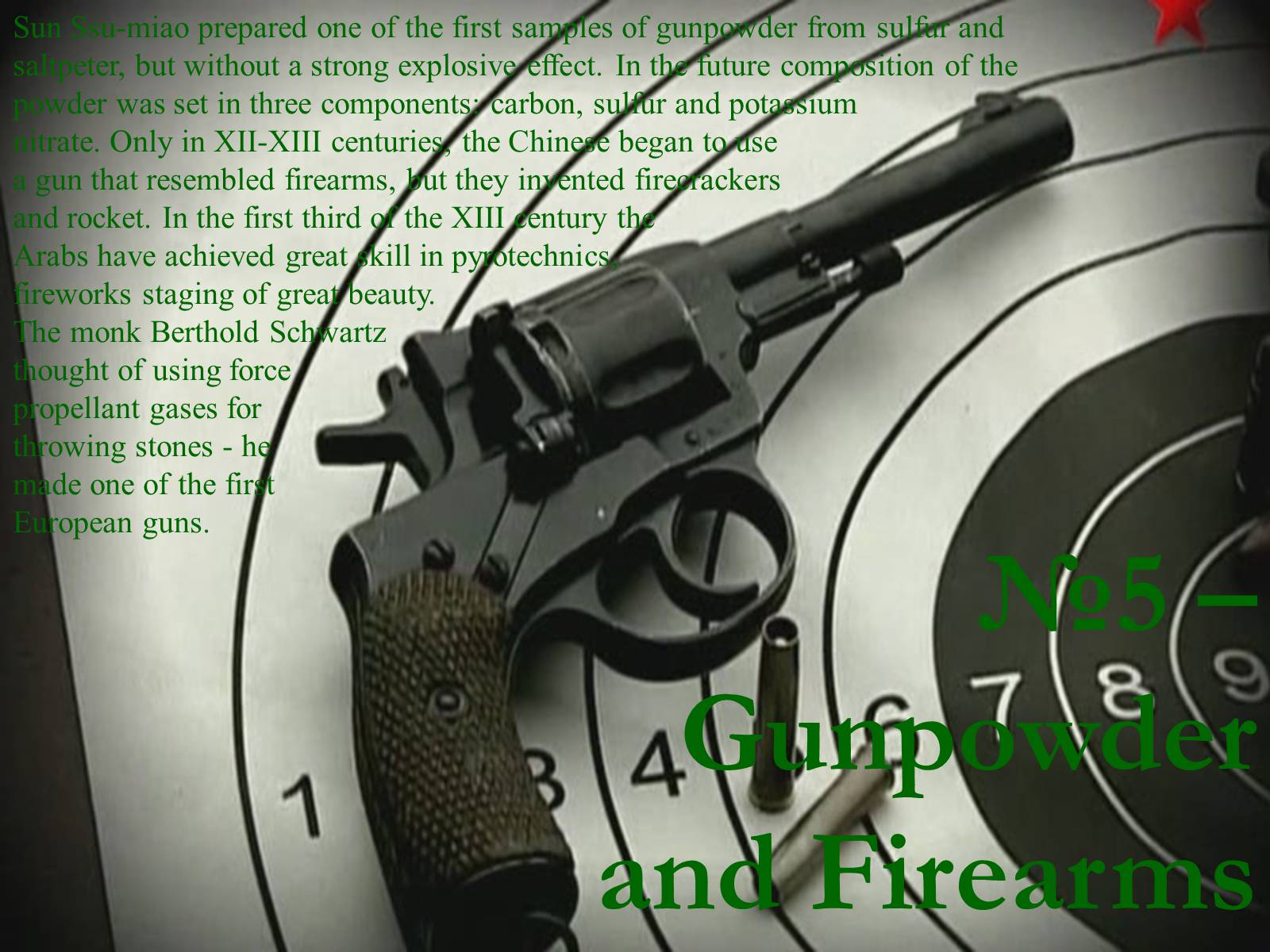 №6 -Telegraph, Telephone, Internet, Radio and so on...
Only in the middle of the XIX century was the creation of the telegraph, the globe has surrounded by telegraph lines. The first experiments on the communicative method of communication, through which one could transfer at any distance live sound of human speech or music in 1837 put an American physicist, Paige, who passed through the sound of an electric current. And later, as a result of a long search for a mobile telephone, television, internet and other means of communication mankind. 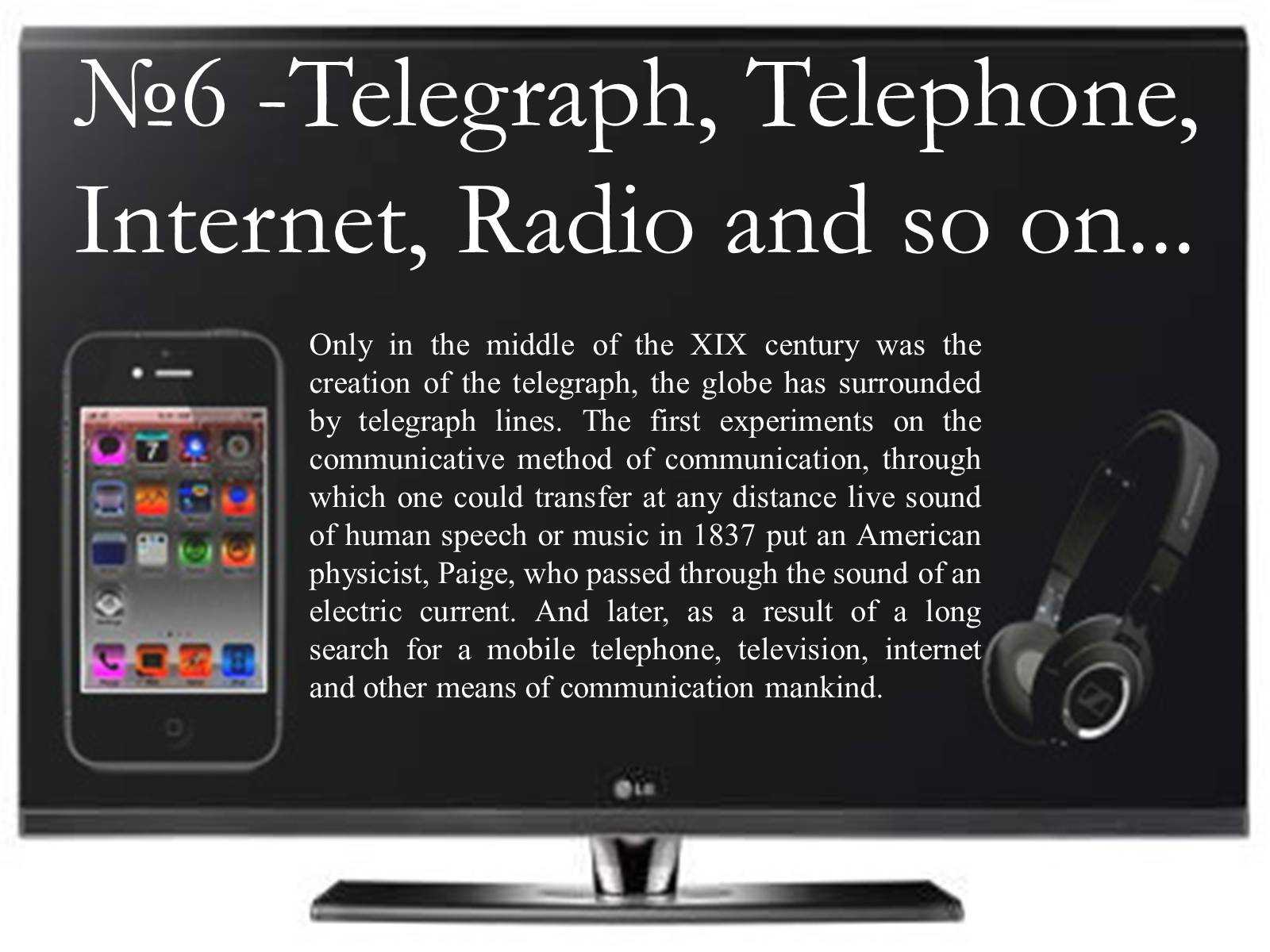 №7 - Car
The immediate predecessor of the petrol car was paromobiley. The first practical effect as vapor car is vapor wagon, built by the Frenchman Cugnot in 1769. In 1803 Trivaytik built the first steam car in the UK. The car appeared only after the creation of a compact and economical internal combustion engine. The first car with a gasoline engine built in 1864 by the Austrian inventor Siegfried Marcus. Eventually he managed to build a two-stroke gasoline engine with electric ignition, which he set at the ordinary wagon. In 1875, Marcus has created a better car.
Official thank the inventors car are owned by two German engineers - Daimler and Benz. Benz designed a two-stroke gas tttengines, four-stroke engines - Otto, but to create a self-propelled with a tttt crew of an internal combustion tttttttengine is not enough.
Cars quickly improved and at the
beginning of the XX century it was in its
main features is identical to the modern car. 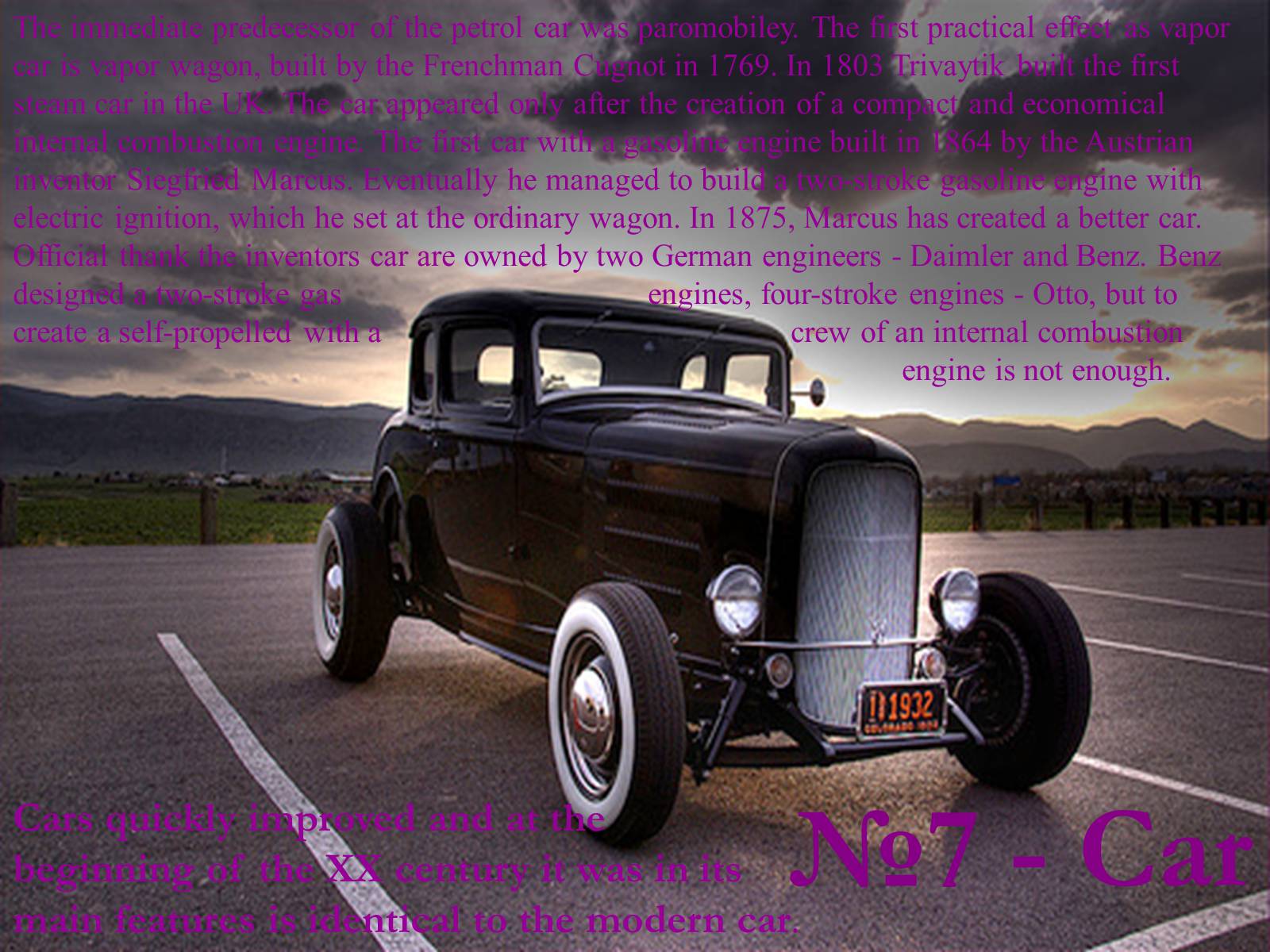 №8 - Light bulb
In the XIX
century, became
common two types of light
bulbs: incandescent and arc.
The glow of the arc is based on the pheno-
menon of electric arc. The first arc lamp with
a manual adjustment of the arc length constructed
in 1844 by French physicist Foucault. The charcoal replaced the sticks
of hard coke. The lamp, which is not complicated by additional me-
chanisms, was invented in 1876 by Russian Yablochkov electrician who
worked in Paris in the studio of Academician Breguet. In 1879, for the
improvement of the light bulb come from a famous American inventor Edison.
That same year, in the presence of three thousand Edison publicly demonstrated
his electric light bulb, illuminating their own home, laboratory, and several adjacent streets. It was the first light bulb with a long service life, suitable for mass production. 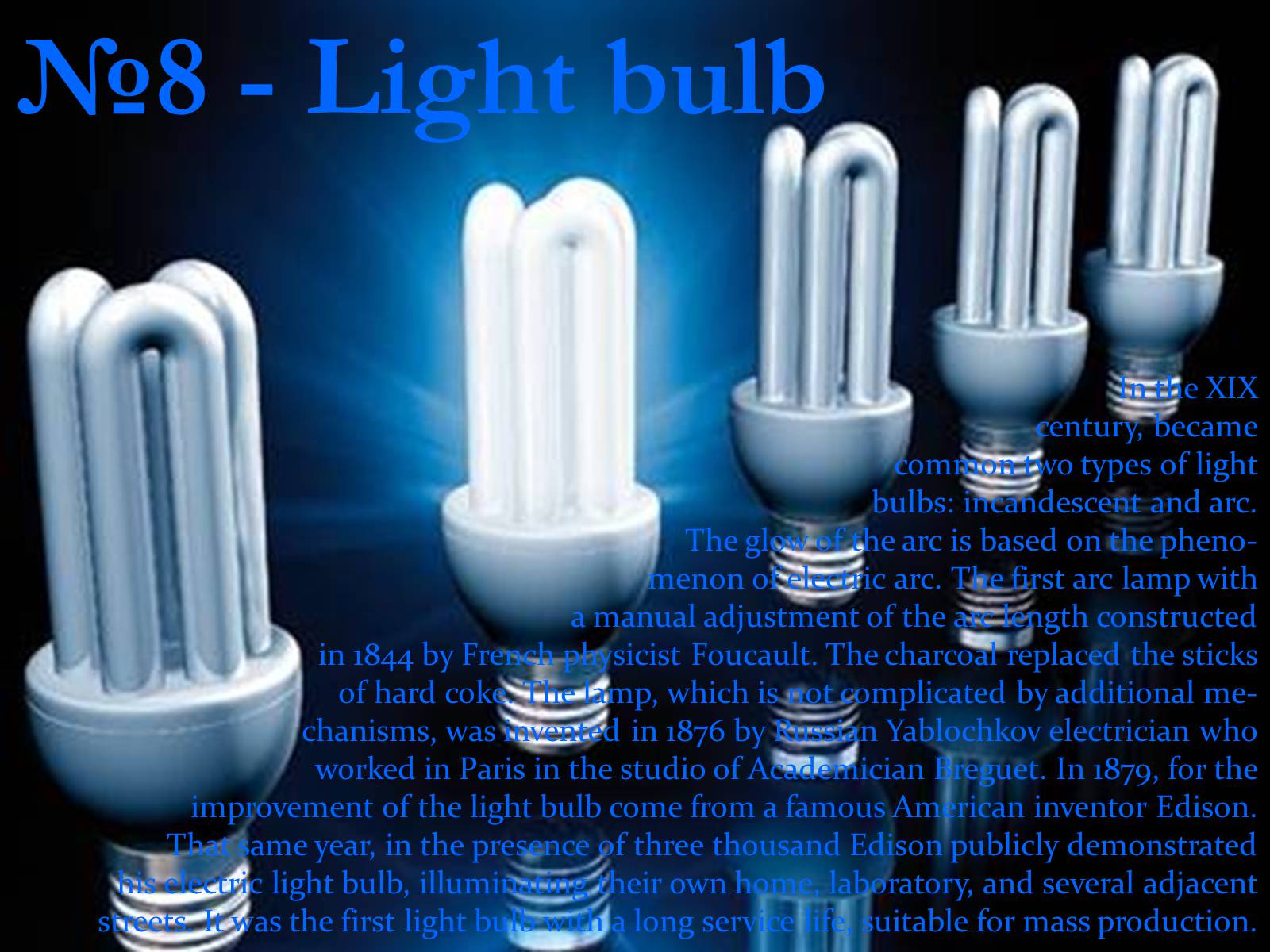 №9 - Antibiotics
The first well-known antibiotic appeared in China two and a half thousand years ago. Some micro-organisms during their life secrete substances
that kill other microorganisms. The idea of
​​using microbes to fight microbes appeared
in the XIX century by Louis Pasteur. After series
of experiments and discoveries it was
established penicillin. He was cured of even
the most severely ill patients with blood
poisoning or pneumonia. In 1939
work began on removing the
antibiotic from the bacteria
streptomitsii. Since then,
antibiotics have been
withdrawn, such as
bacitracin, polymyxin, viomitsin,
chloramphenicol and tetracycline.
Beginning in the seventies of last century, almost
all natural antibiotics have synthetic counterparts. 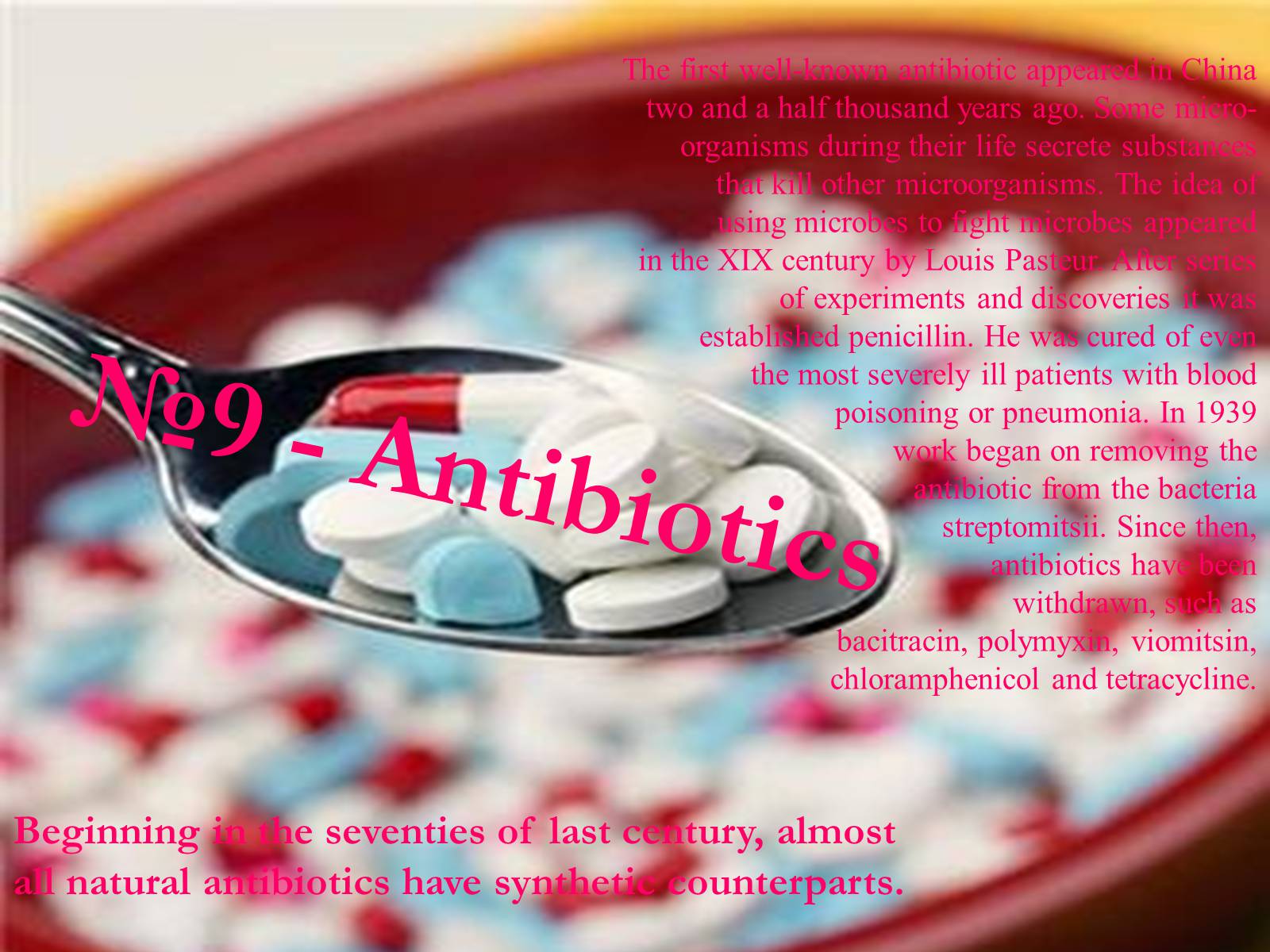 №10 -Sail
& Ship
One of the earliest varieties of Egyptian ships, appeared about 5000 BC, was the bark. Near the necropolis of Saqqara displayed various stages of construction of the ship planking. Later, around 2600 BC, to replace the two-legged mast had to use one leg to this day. The main engine of the ship remained muscular strength paddlers. Egyptians belongs to great improvement of the paddle - the invention of rowlocks. The Phoenicians learned to make from their trunks high quality dugouts, and boldly went on them in the sea, then began to build ships. They also built the first keel boat. All these innovations were the decisive basis for the rapid development of the shipbuilding industry and defined the look of all subsequent ships. 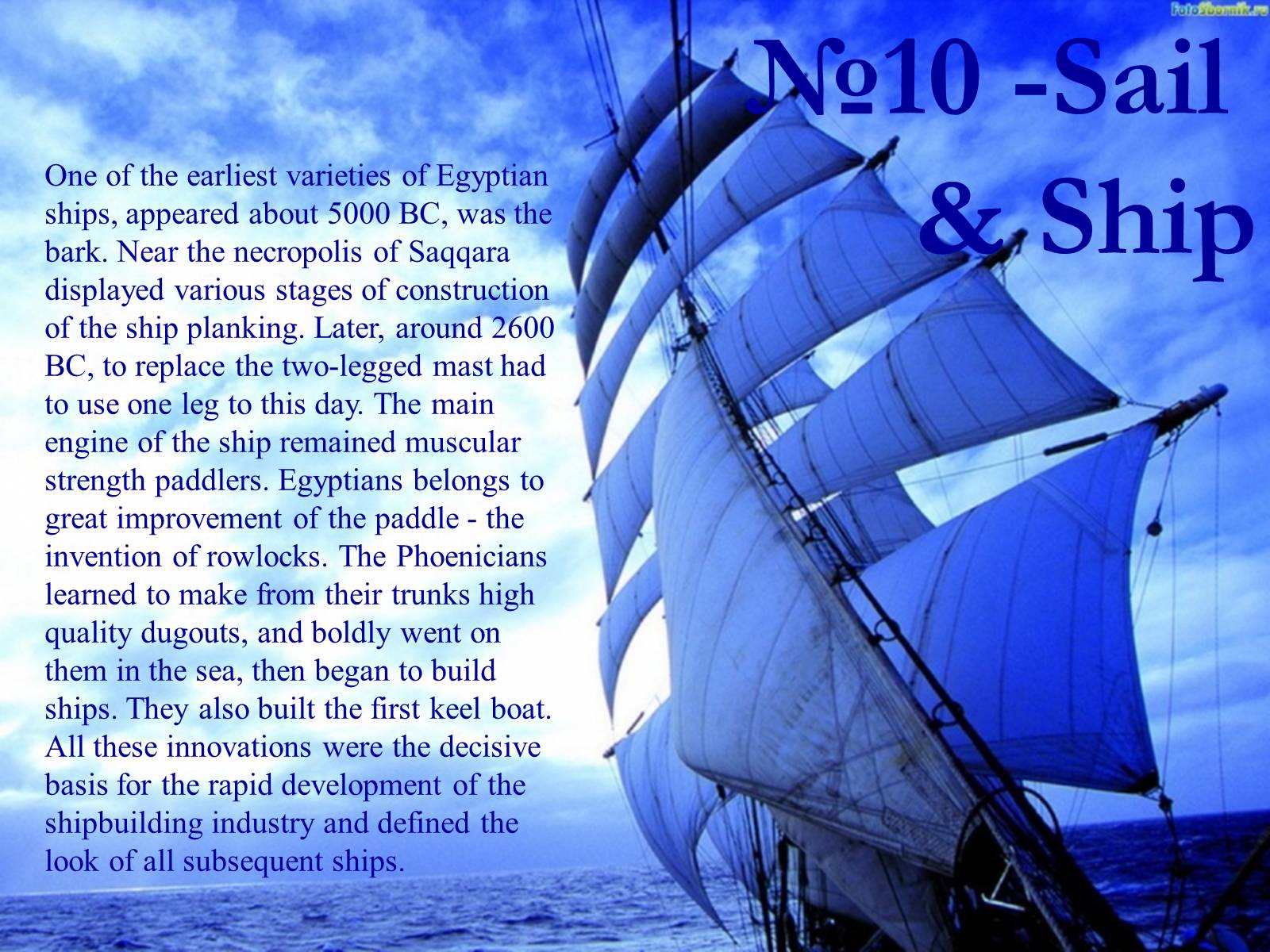 Thank You For Attention!
Have a nice day =) 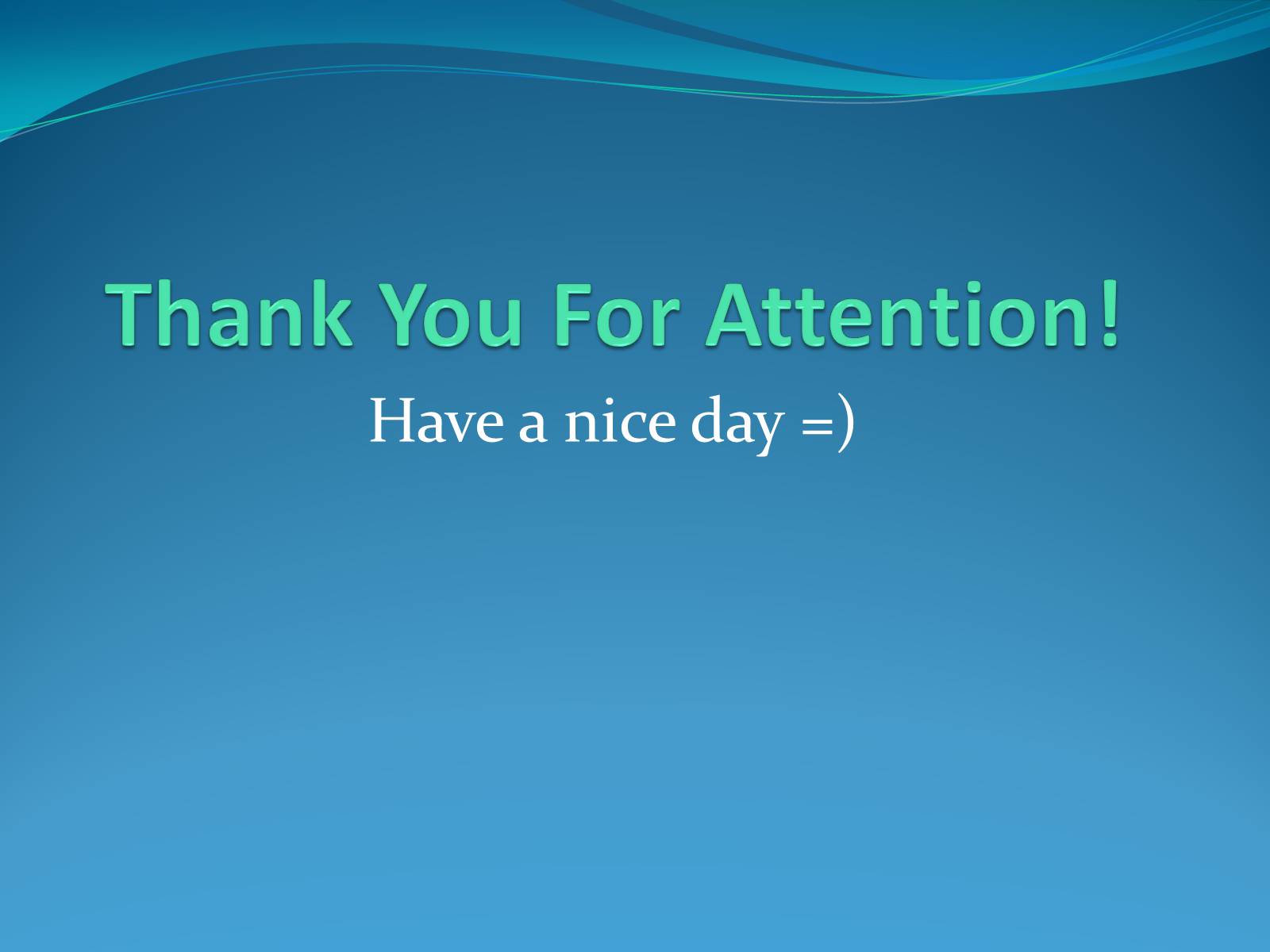