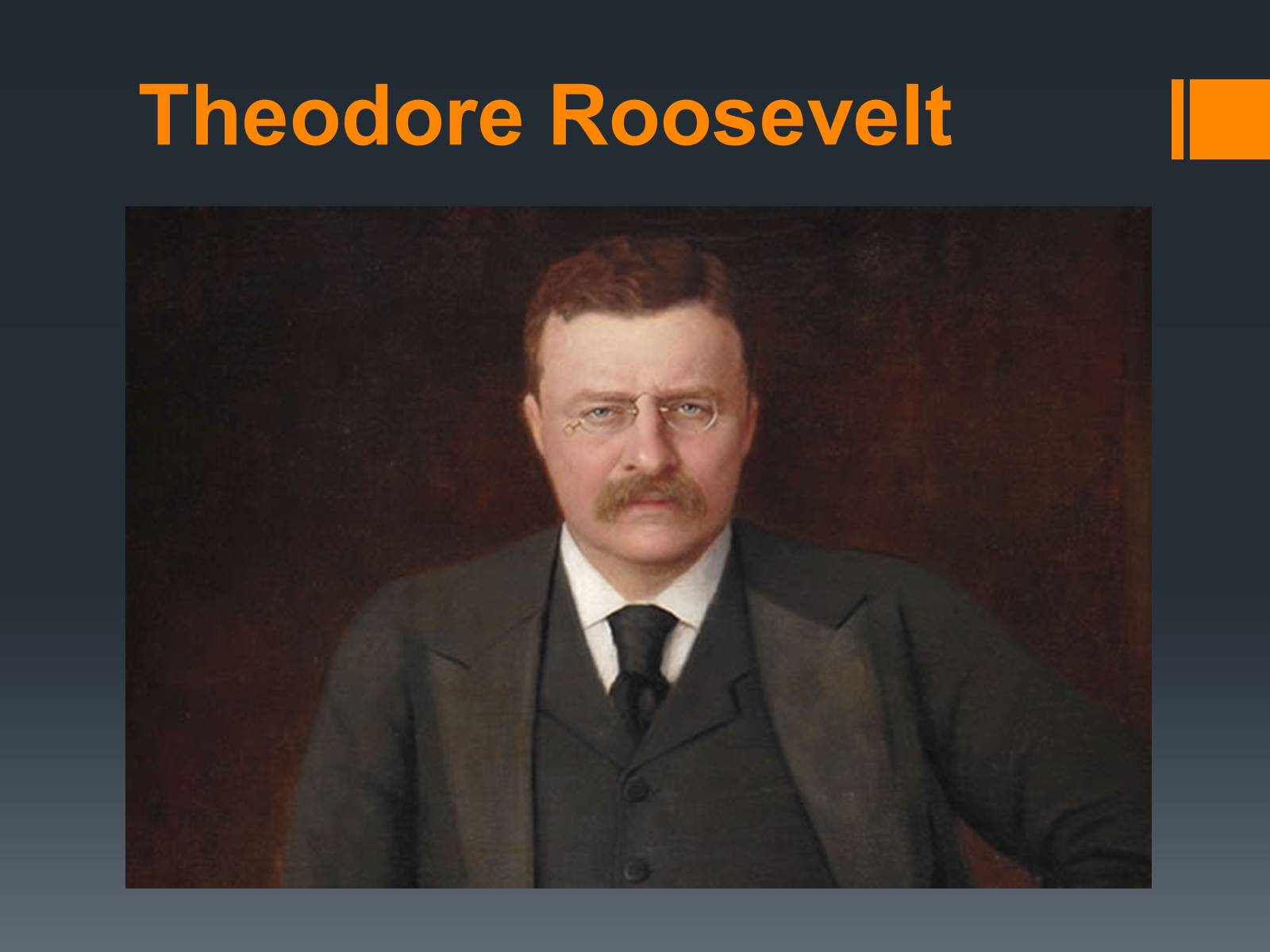 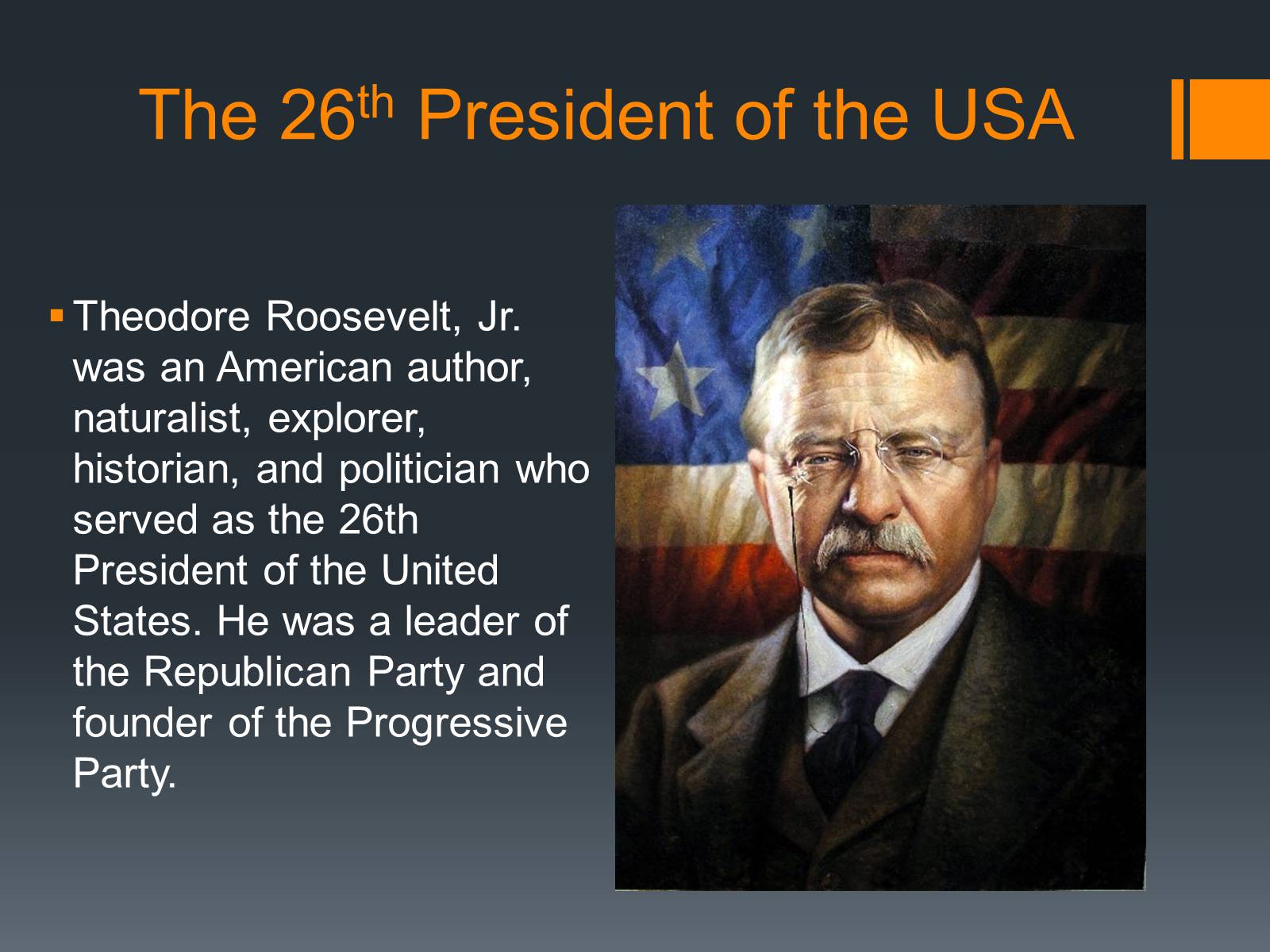 Biography
Theodore Roosevelt, Jr. was born on the 27th of October, 1858 in New York. He was always a sickly child afflicted with asthma. He traveled widely through Europe and the Middle East with his family. At the age of eighteen he entered Harvard College. During college, Roosevelt fell in love with Alice Hathaway Lee. They were married in October 1880. Later he was elected to the New York Assembly and served two terms here. But a double tragedy struck Roosevelt in 1884. His wife and mother died on the same day.
But during this time Roosevelt continued his writing career, which began with the publication of his book, The Naval War of 1812, in 1882. In 1889 Roosevelt was a member of the Civil Service Commission of which he later became a president. Theodore Roosevelt came into office in 1901. 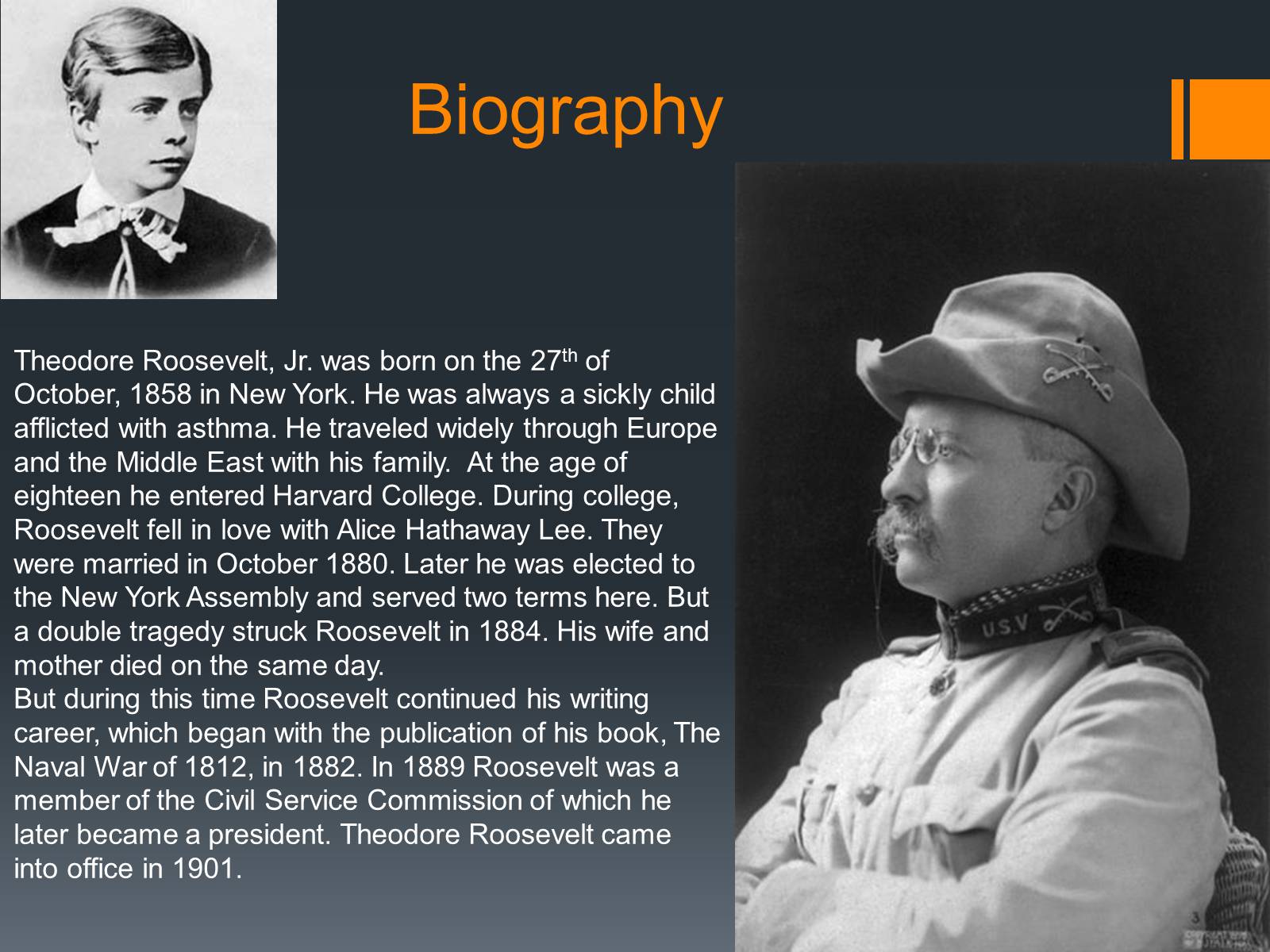 PRESIDENCY
As President, Roosevelt worked to improve the lives of American citizens. He also was the nation's first President, who worked to establish national parks and forests. In foreign policy, Roosevelt wanted to make the United States a global power by increasing its influence worldwide. Also he built the Panama Canal. Roosevelt is considered the first modern U.S. President because he greatly strengthened the power of the executive branch. Also Roosevelt made the White House the center of news every day, providing interviews and photo opportunities.
In 1919, at the age of sixty, he died in his bed. 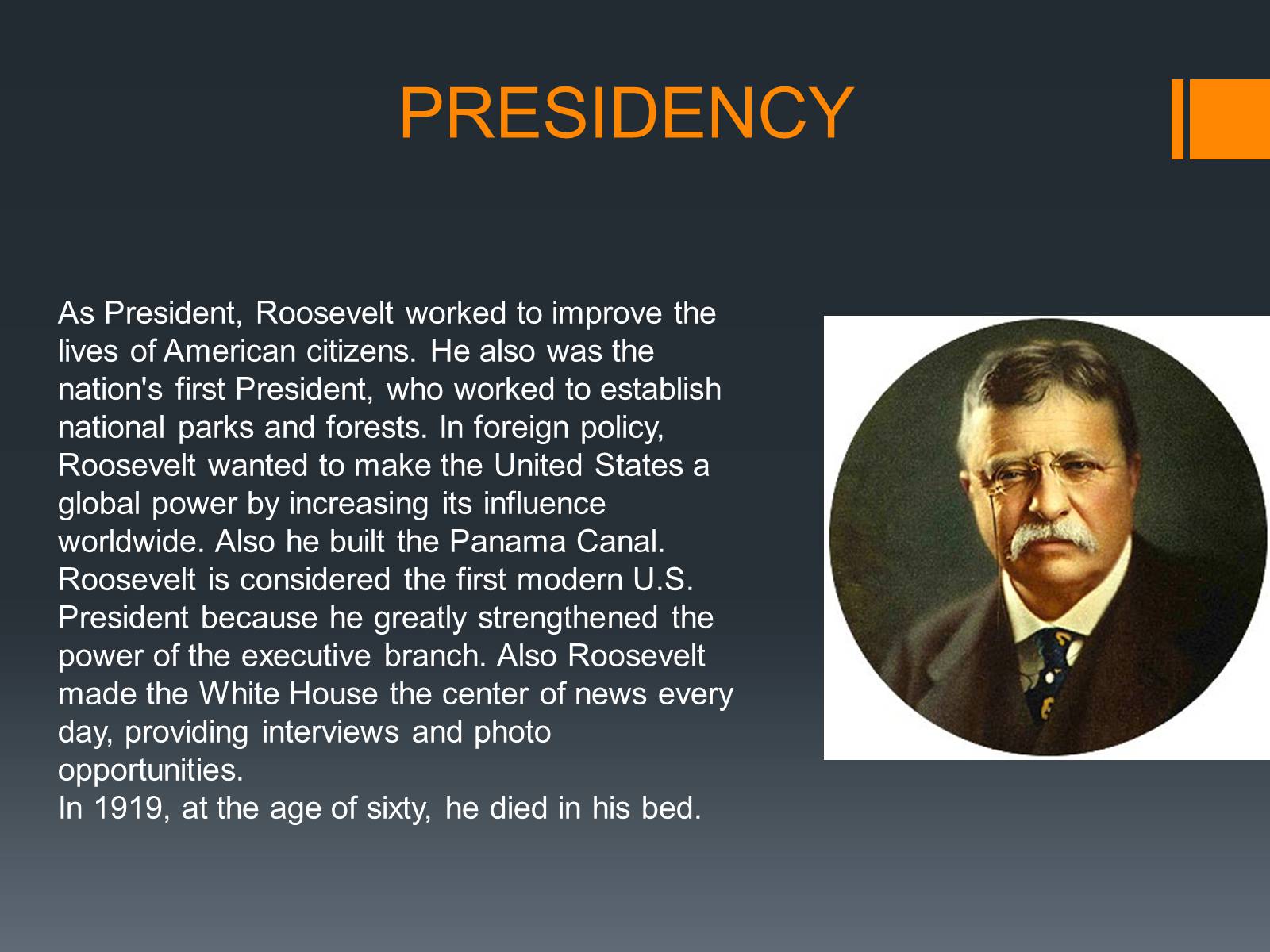 Interesting facts
Roosevelt was the first president to travel outside of the continental United States while in office.
In 1906, Roosevelt was awarded the Nobel Prize for his role of negotiator in the Russo-Japanese War. He was the first American who won this Prize.
Roosevelt was blind in his left eye. It was the result of a boxing injury.
Theodore Roosevelt was the youngest president. He became the President at the age of 42.
The teddy bear was named after Roosevelt, in response to a cartoon showing the president refusing to shoot a bear after it had been tied to a tree.
The portrait of Theodore Roosevelt is carved on the Mount Rushmore. 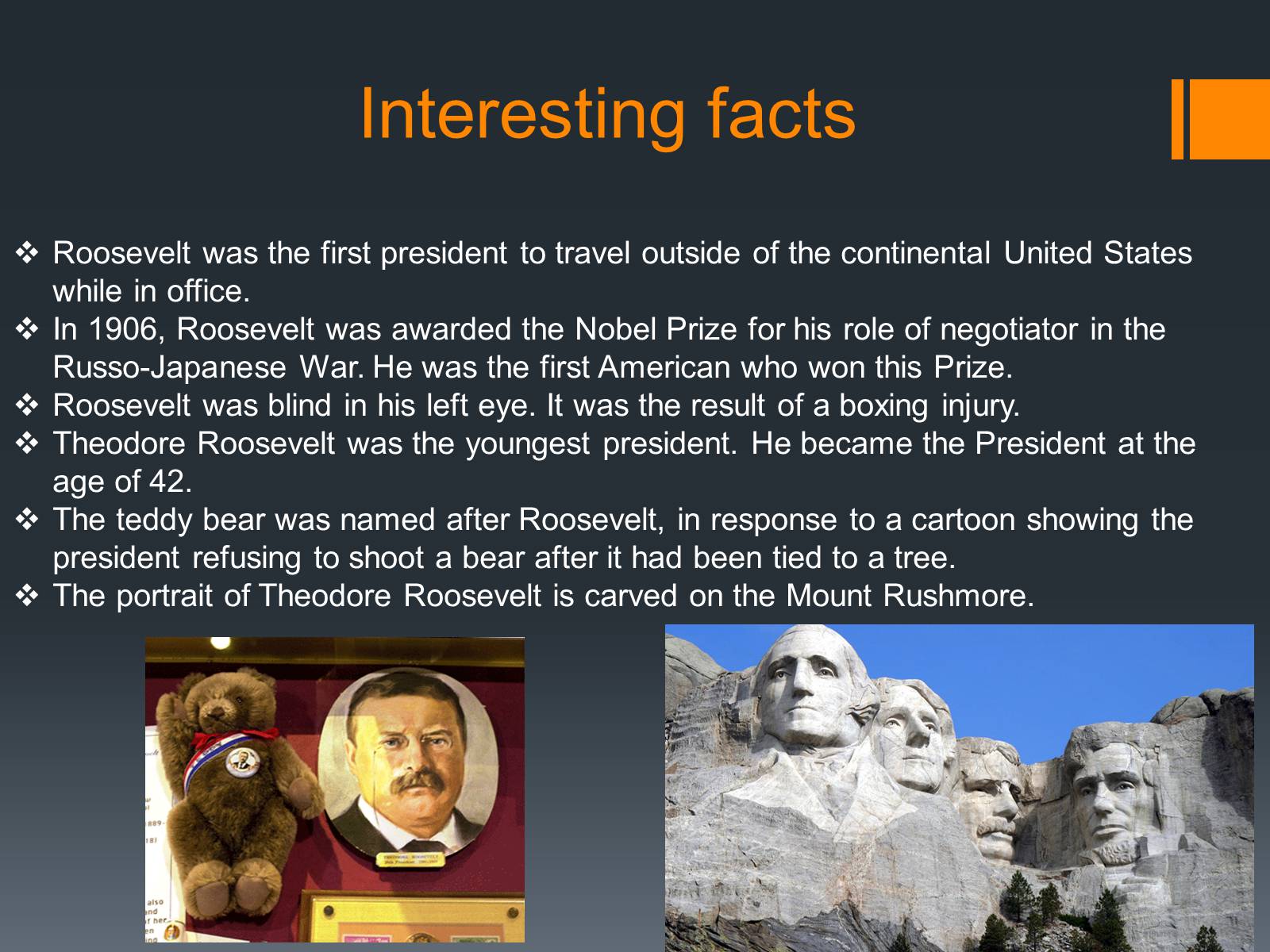