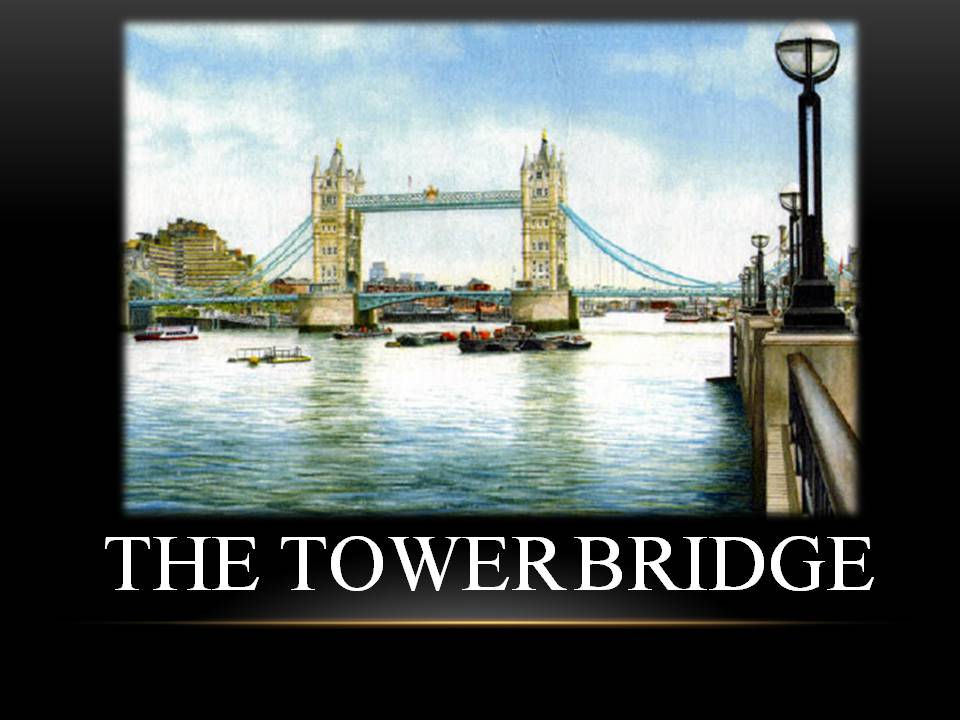 BUILDING THE TOWER BRIDGE
Work was started in April 1886. The bridge was to have been finished by 1889, but difficulties arose and Parliament was twice asked to extend the time for the completion of the work.
The bridge was eventually opened on June 30, 1894, having cost about £1,000,000 sterling to build, a remarkably small sum for such a bridge in such a position. The total length of
the bridge, including the approaches,
is half a mile! When it was built, the
Tower Bridge was the largest and
the hardest of all bascules bridges
ever completed. 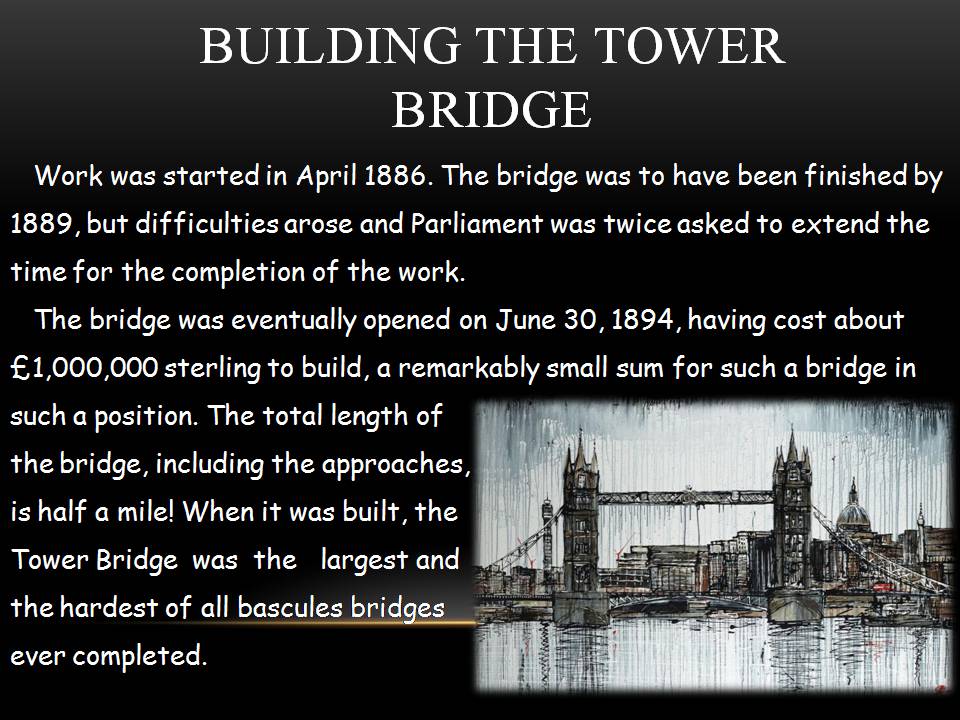 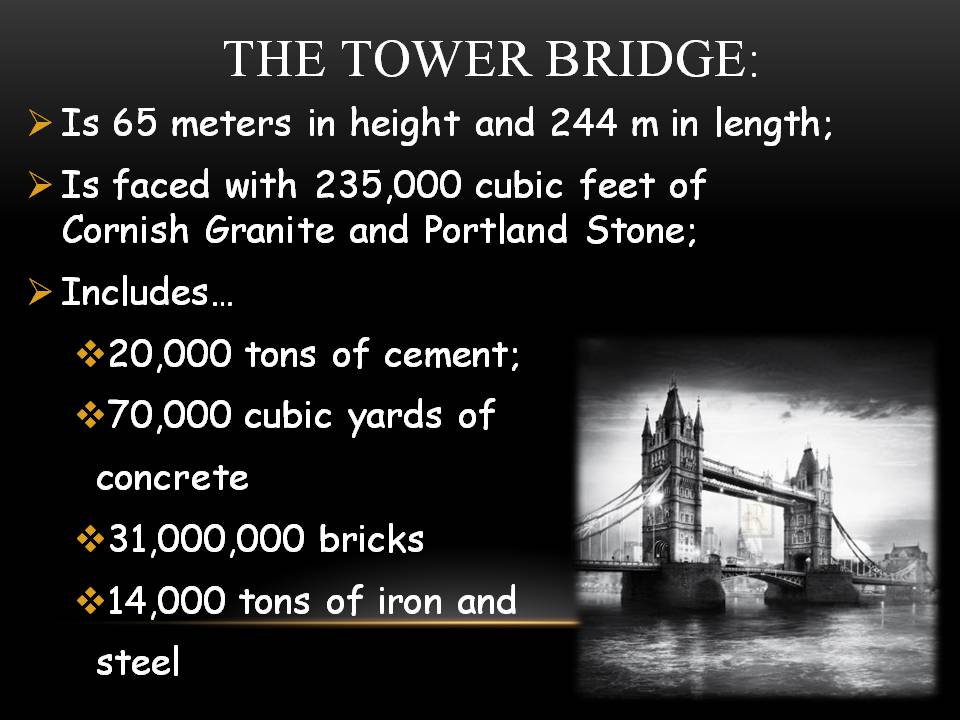 Hydraulic system
The original raising mechanism was powered by pressurised water stored in several hydraulic accumulators. The entire hydraulic system along with the gas lighting system was installed by William Sugg & Co Ltd., the well known Westminster gas engineers. In 1974, the original operating mechanism was largely replaced by a new electro-hydraulic drive system, designed by BHA Cromwell House. Some of the original
hydraulic machinery has been retained,
although it is no longer in use. It is open
to the public and forms the basis for
the bridge's museum, which resides in
the old engine rooms on the south
side of the bridge. 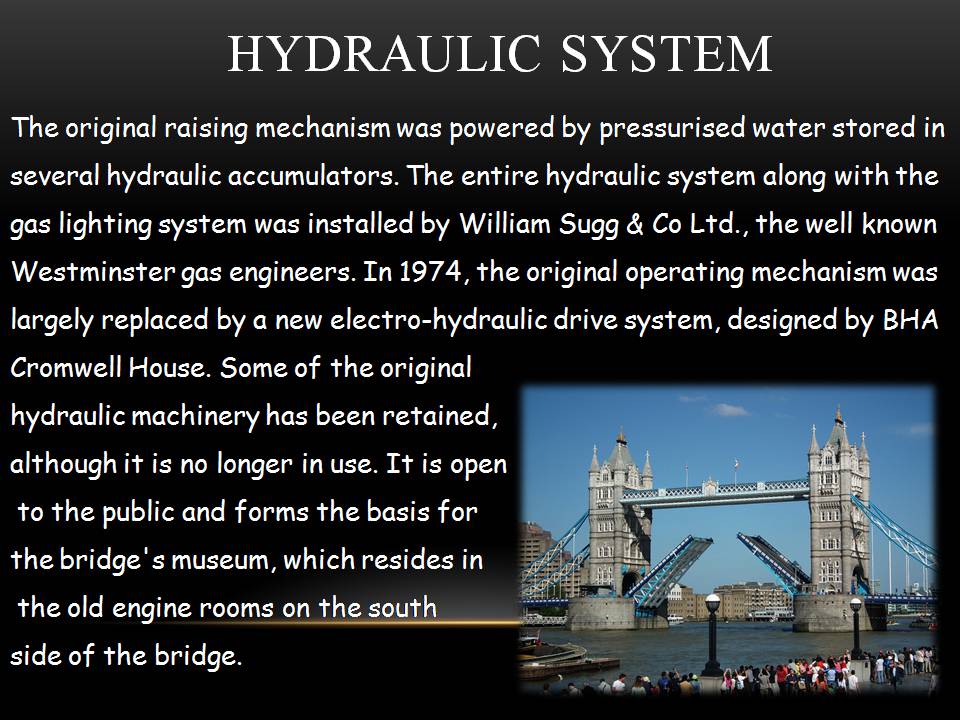 Navigation control
To control the passage of river traffic through the bridge, a number of different rules and signals were employed. Daytime control was provided by red semaphore signals, mounted on small control cabins on either end of both bridge piers. At night, coloured lights were used, in either direction, on both piers: two red lights to show that the bridge was closed, and two green to show that it was open. In foggy weather, a gong was sounded as well.
Some of the control mechanism for
the signalling equipment has been
preserved and may be seen working
in the bridge's museum. 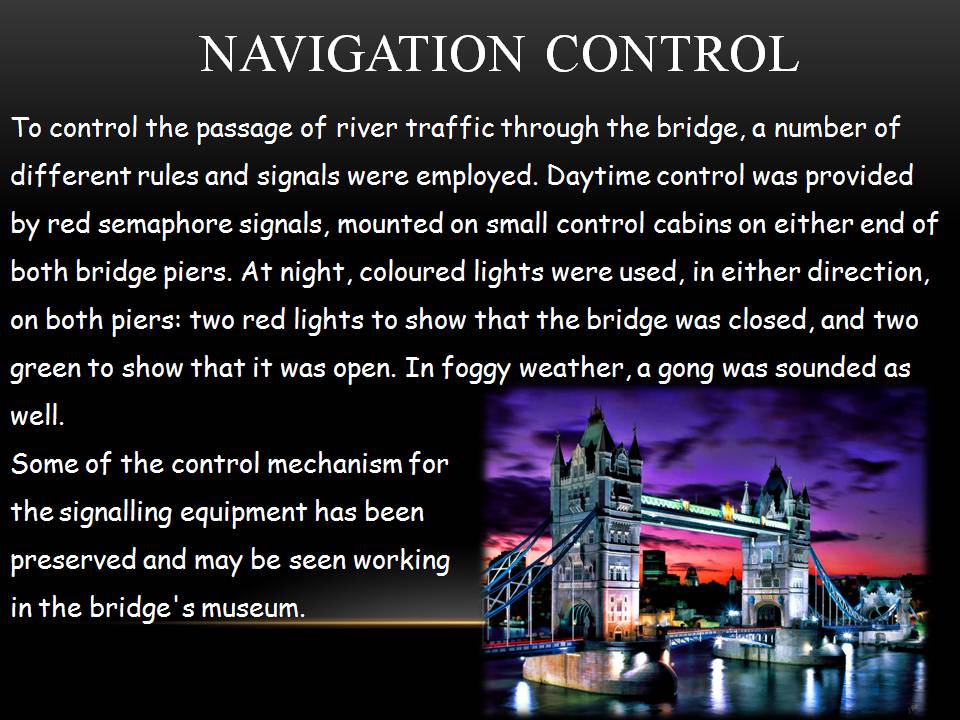 Traffic
Tower Bridge is still a busy crossing of the Thames: it is crossed by over 40,000 people (motorists, cyclists and pedestrians) every day. To maintain the integrity of the structure, the City of London Corporation has imposed a 32 km/h speed restriction, and an 18 tonne weight limit on vehicles using the bridge. A camera system measures the speed of traffic crossing the bridge, utilising a number plate recognition system to send fixed penalty charges to speeding drivers.
The bascules of the bridge
are raised around 1000 times
a year. 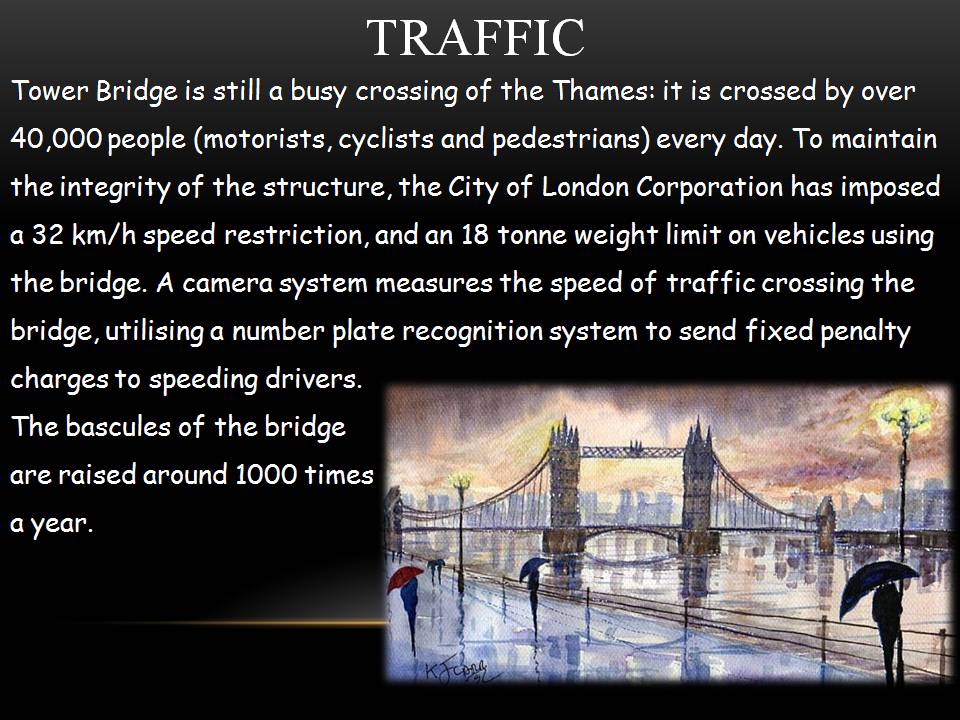 Traffic
The bridge featured in publicity for the 2012 Summer Olympics being held in London. In June 2012 a set of Olympic rings was suspended from the bridge to mark one month to go until the start of the games. The rings cost £259,817 to make.
Following the Olympics, the rings were removed from Tower Bridge and replaced by the emblem of the Paralympic Games for the 2012 Summer Paralympics. 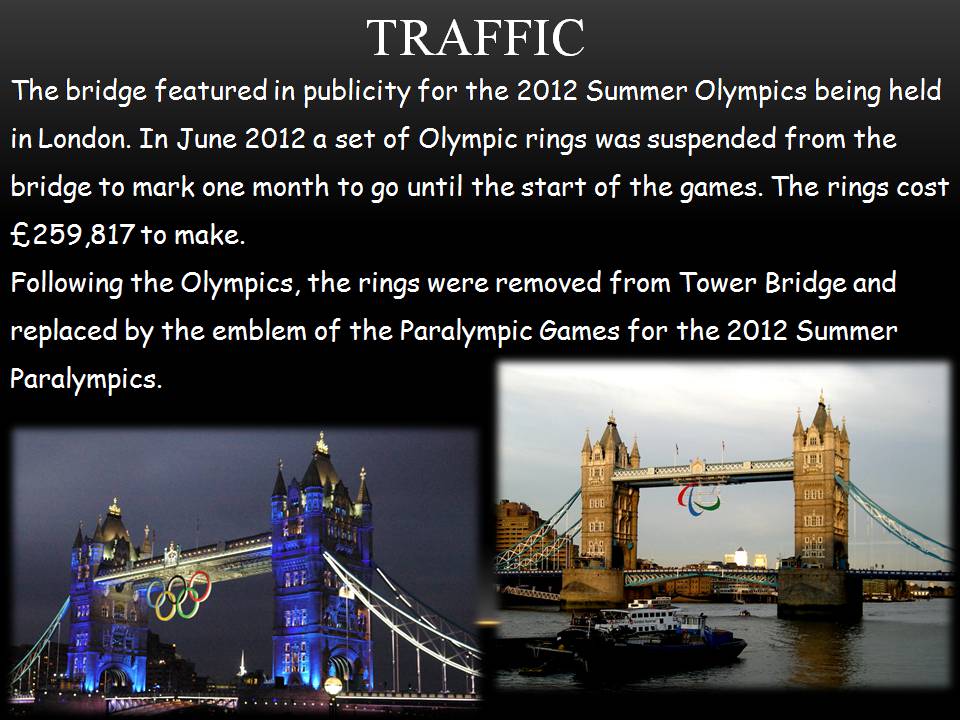 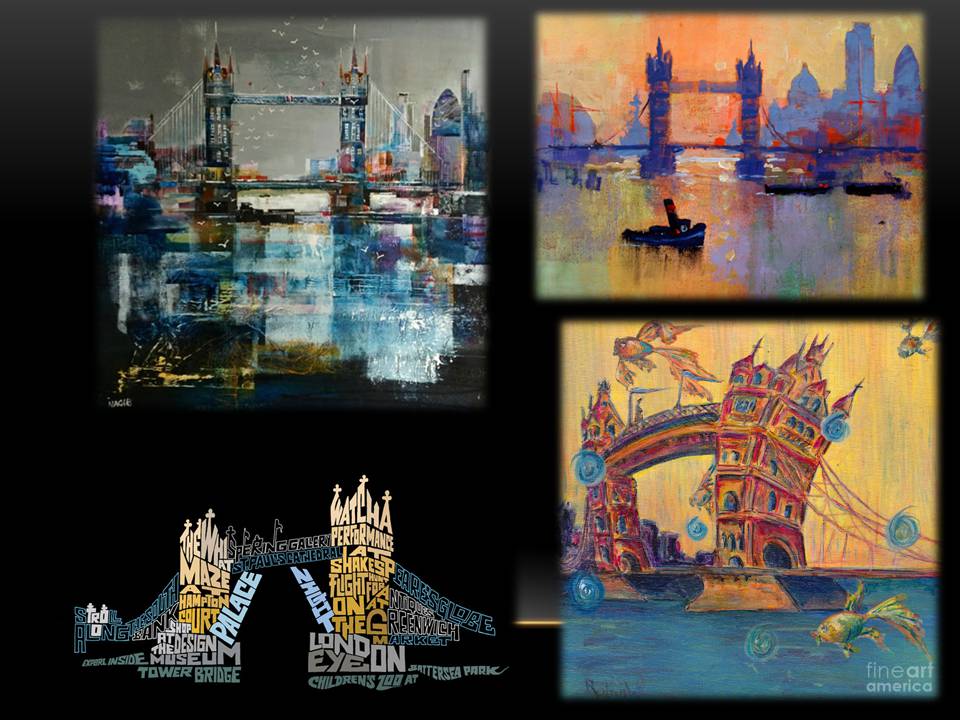