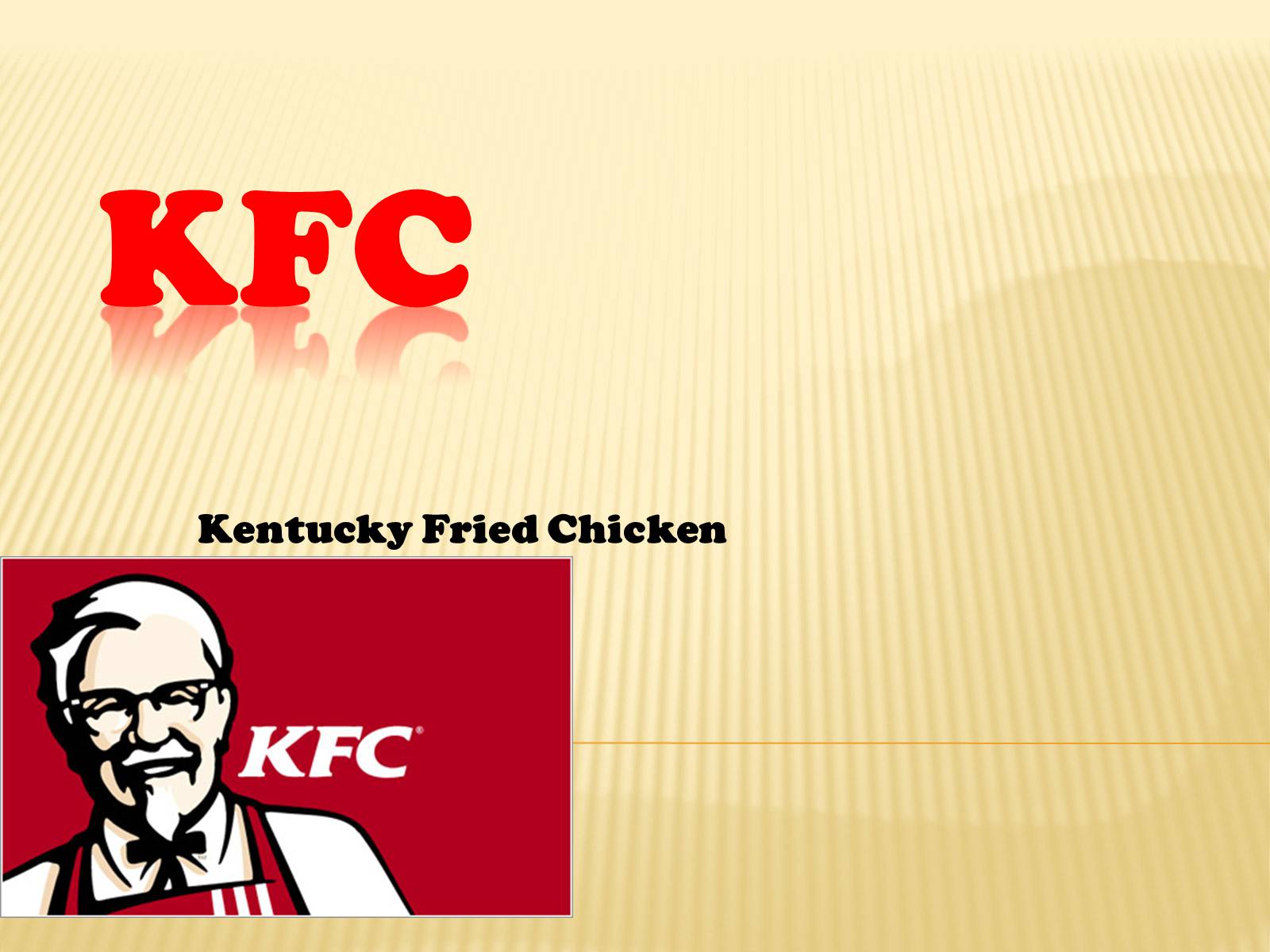 Introduction
KFC (whose name was originally an acronym for Kentucky Fried Chicken) is a fast food restaurant chain that specializes in fried chicken and is headquartered in Louisville, Kentucky, United States (US).
KFC was founded by Harland Sanders, an entrepreneur who began selling fried chicken from his roadside restaurant in Corbin, Kentucky, during the Great Depression.
KFC was one of the first fast food chains to expand internationally, opening outlets in England, Mexico and Jamaica by the mid-1960s
There are 4 restaurants in Kiev and 23 in Ukraine. 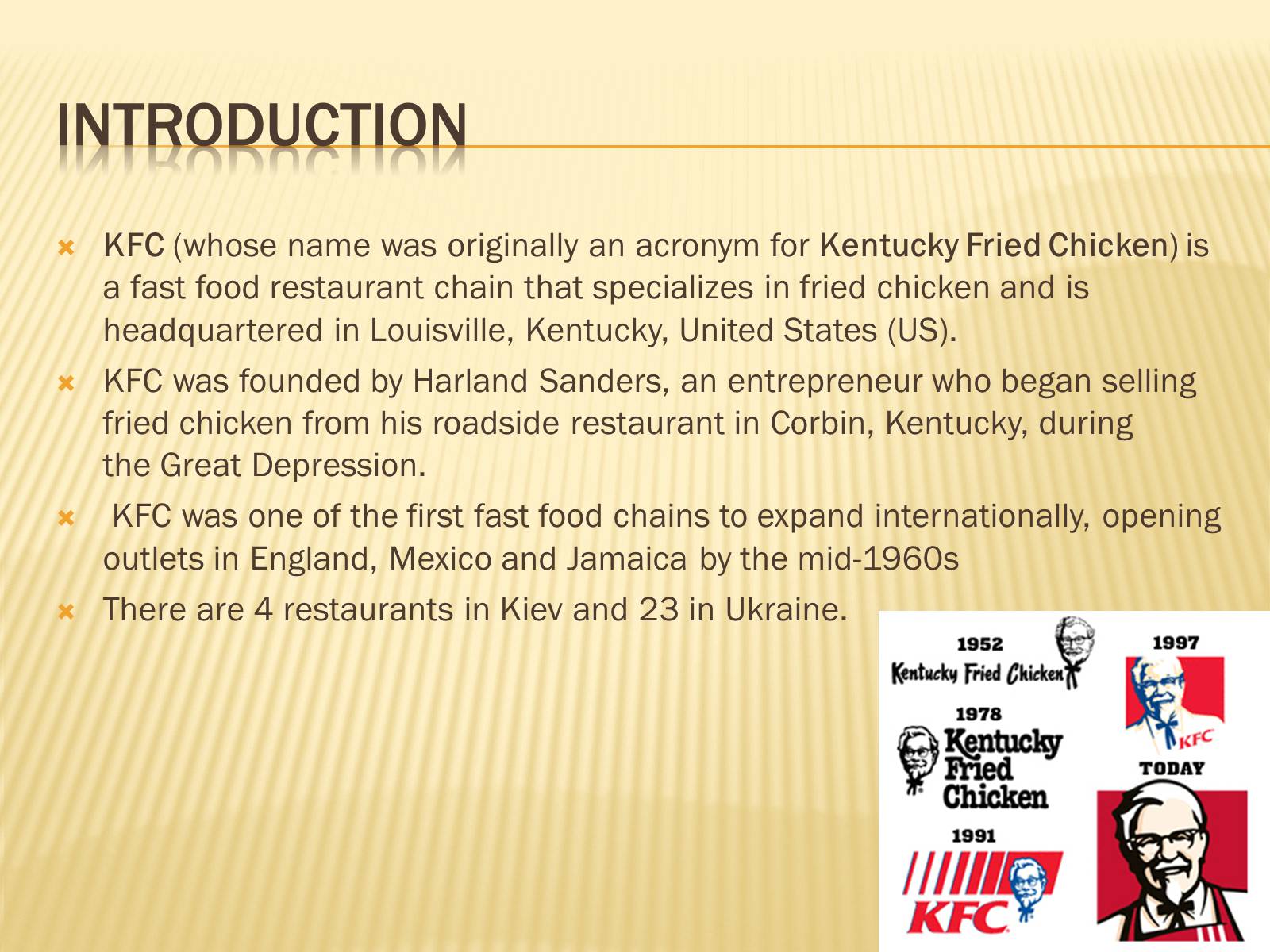 Food & Prices
KFC's core product offering is pressure fried chicken on the bone pieces seasoned with the "Original Recipe". The product is typically available in either two or three piece individual servings, or in a family size cardboard bucket typically holding from 6 to 16 pieces of chicken. Poultry is divided into 9 different cuts (2 drumsticks, 2 thighs, 2wings, 1 keel, and a backbone based breast cut divided into 2 pieces. 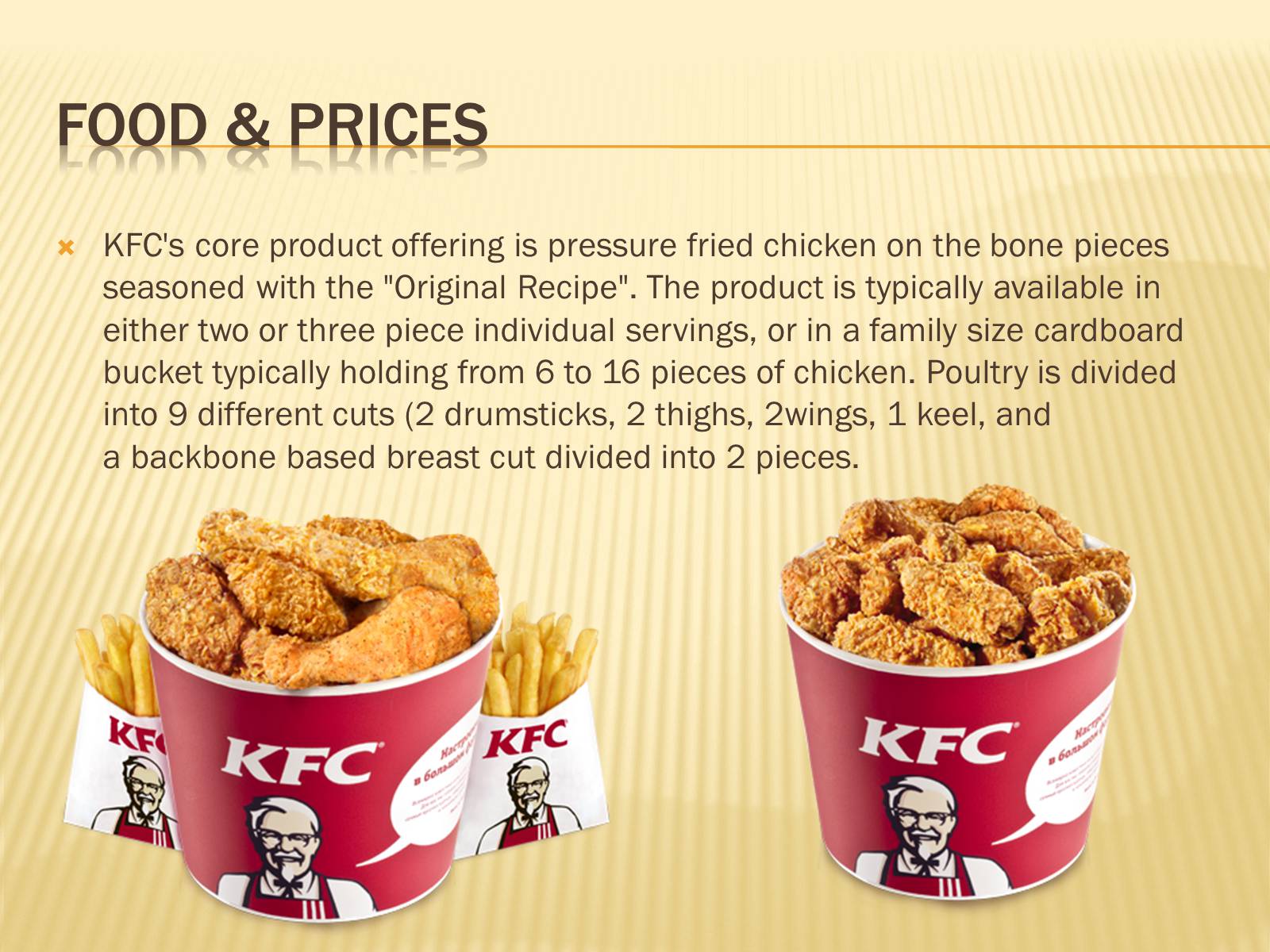 Food & prices
There are many burgers, chicken pieces, baskets, snacks, salads, desserts and drinks.
The breading process typically takes between 2 and 4 minutes. Cooking time is for a maximum of 7 minutes at 185degrees celsius. Following this, the chicken is left to stand for 5 minutes in order for it to sufficiently cool before it is placed in the warming oven. 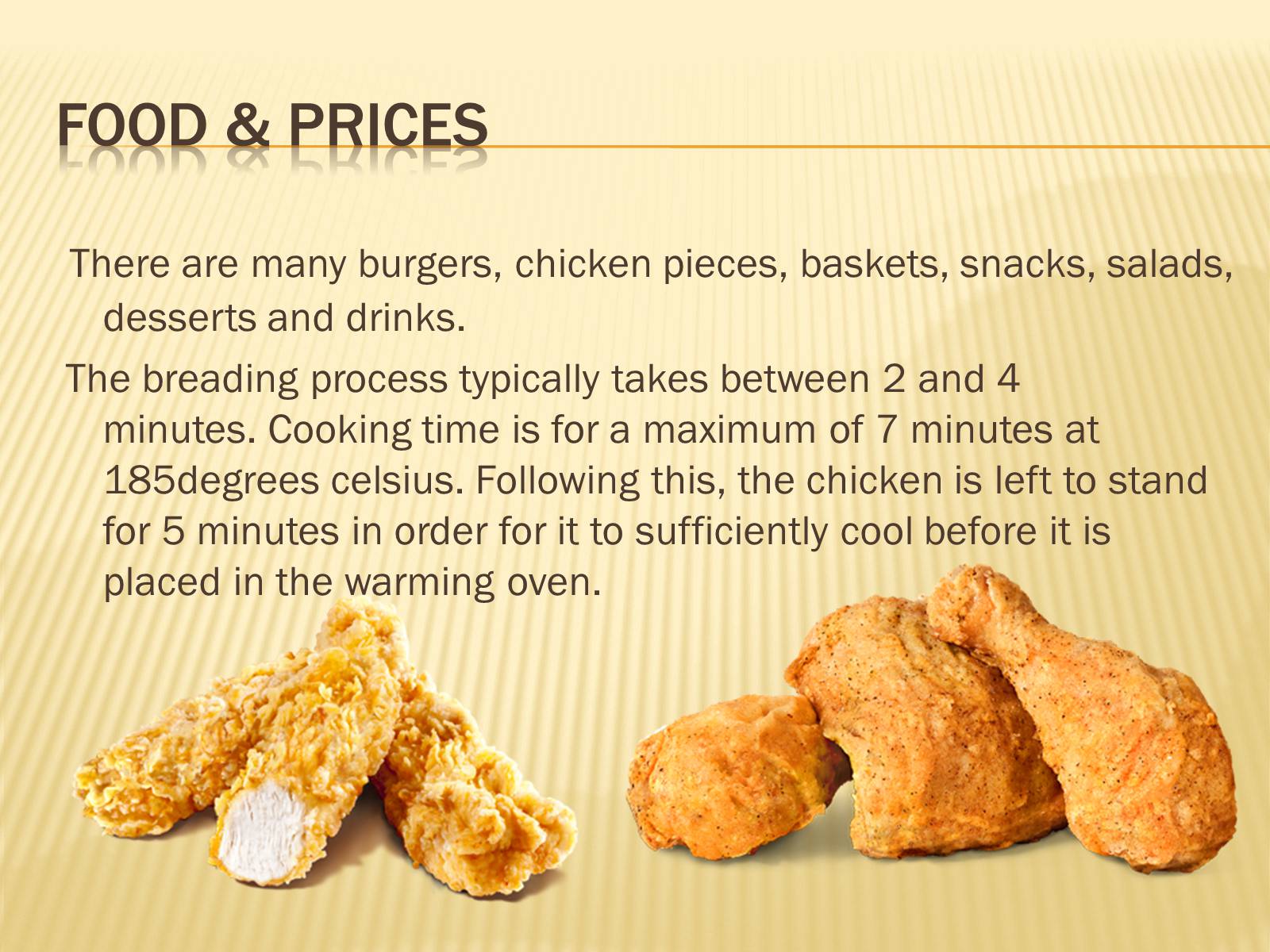 Service
All restaurant staff work together as one team. We win together due to helping and supporting each other! Restaurant employees can't be bored because they have various interesting work: we prepare and package special KFC dishes, serve our guests every day, make them feel long-awaited so they want to come to our restaurants again and again. 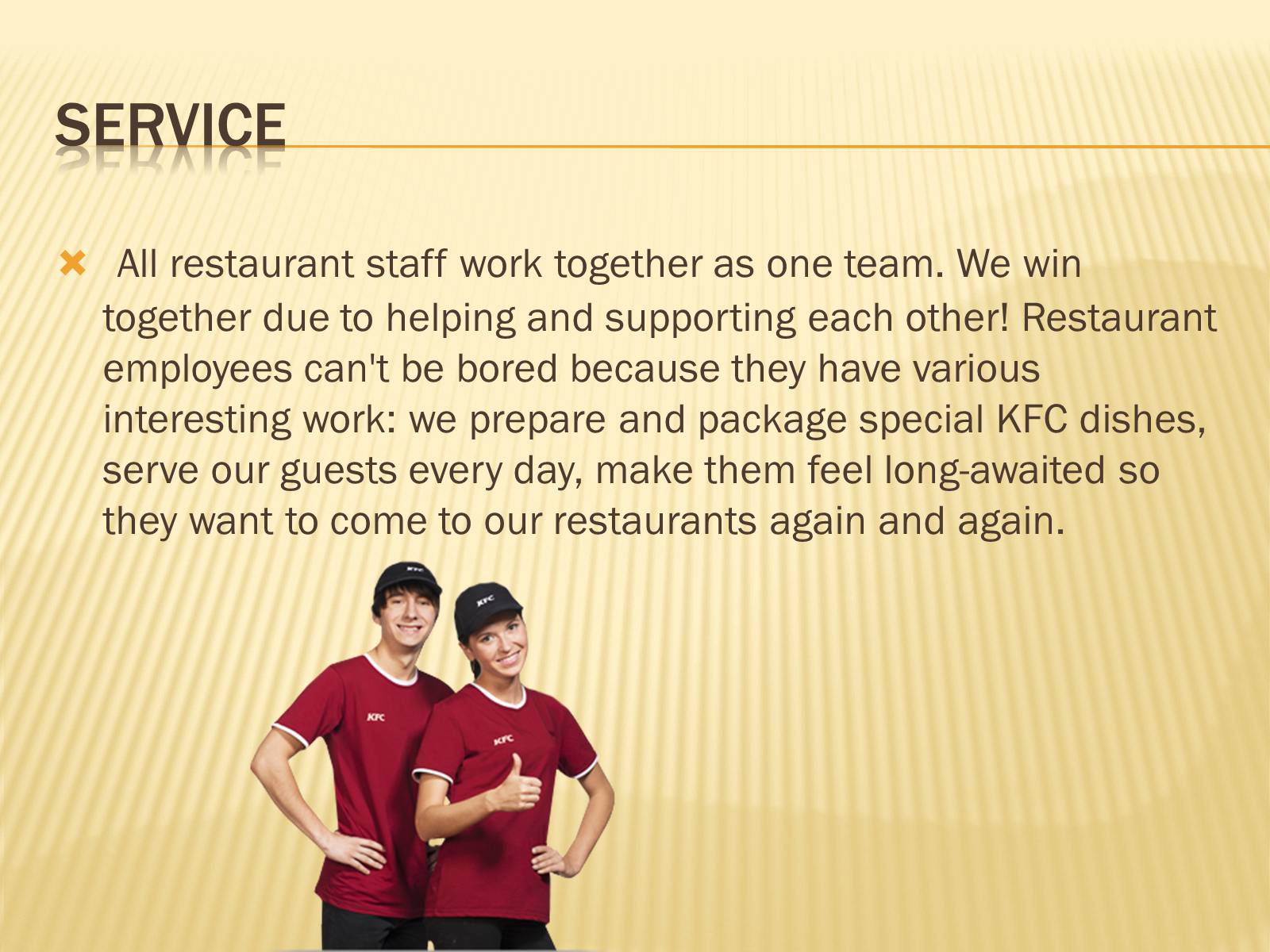 Atmosphere
When you are in KFC, you feel very tasty smell. When you hear this smell, you start to be hungry.
There is very comfortable interior, good and friendly workers, and nice music.
If you want you can sit on
the chair or on the soft
sofa. 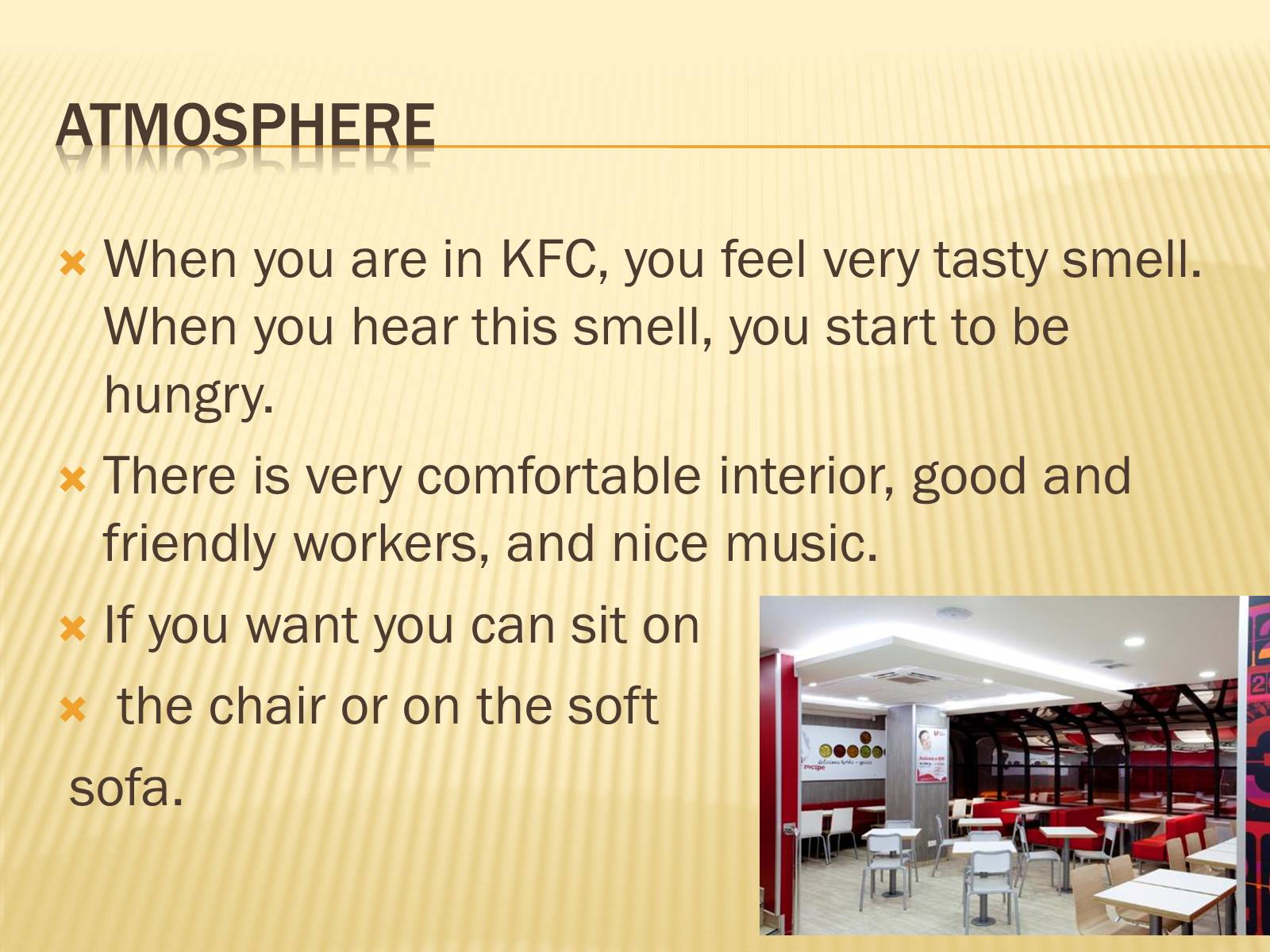 Conclution
A lot of people really like KFC and want to eat there regullary. Because, there are soft sofas, tasty food and communicable personal. All food in this restaurant very calories, but people go to eat there anyway. We like KFC and very satisfied by it. 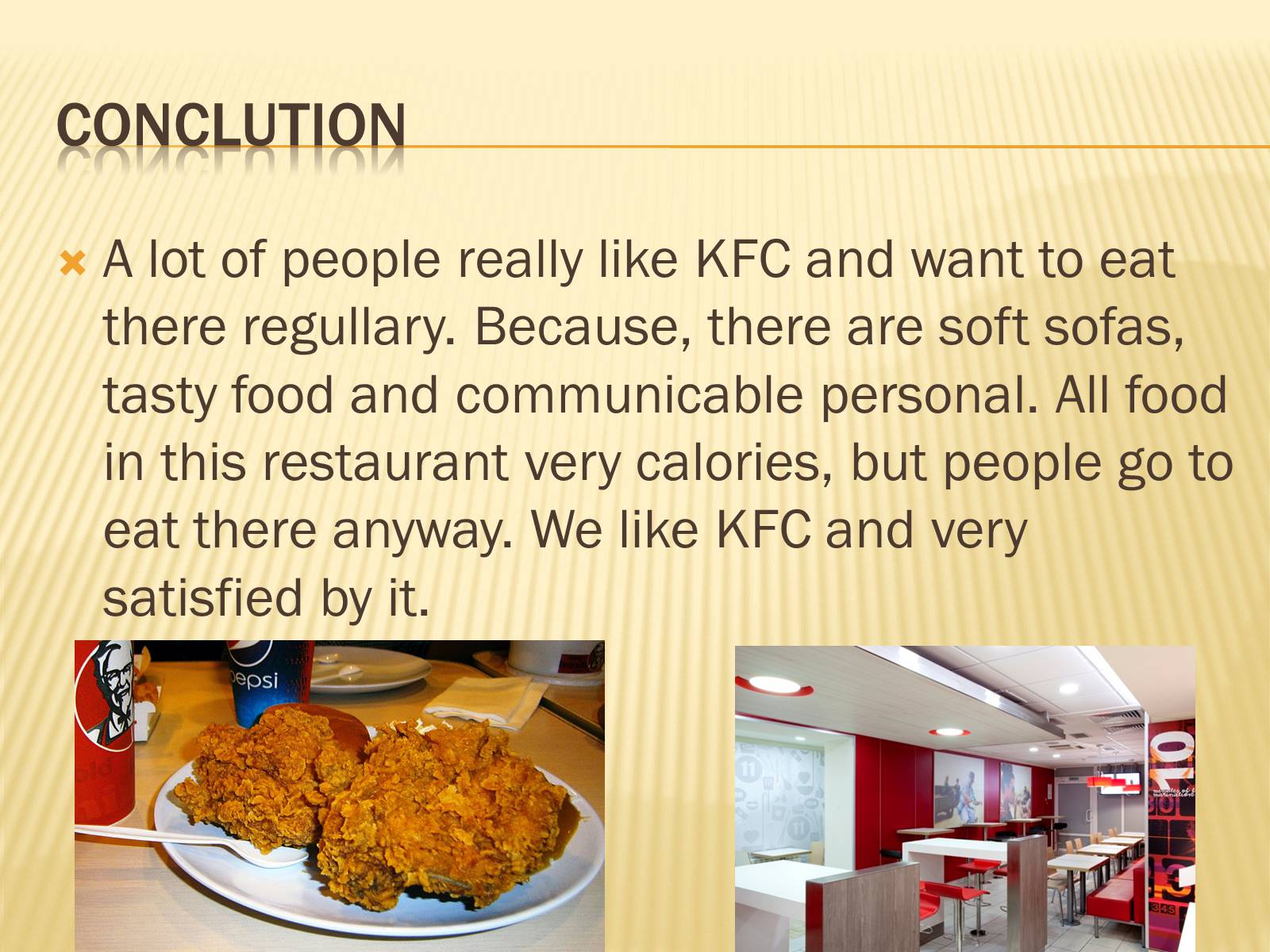